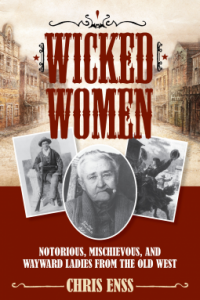 Wicked Women is the story of the Notorious, Mischievous, and Wayward Ladies from the Old West.  I’m not sure what it is that draws me to these type of books, but I just love reading about some bad ass ladies from history.  There are 28 ladies featured in this book from “The Deadly Paramour” to “The Hungarian Madam” to “The Outcast’s Friend” and everything in between.

Each chapter starts with the woman’s name, her nickname and then a quote about them. Photos are also included. Each chapter is only about 10 pages so it has to pack a lot of information in on each of the ladies.

One of the stories was about Julia Bulette – who was murdered but the scene was set in such a way that it looked like she was sleeping. No one was sure who had killed her, until a woman who had bought some silk that may have been stolen from Julia turned up.  After checking with who sold Julia the silk they identified it as hers and Mrs Cazentre who now was in ownership of the silk was able to ID the guy who had sold it to her. He was found guilty of murder and sentenced to be hanged. So many people showed up to watch it was hard for them to get the carriage down the street!

It seemed like a lot of these ladies got wrapped up in gambling in the old west.

A lot of fascinating stories from the old west!

This collection of short, action-filled stories of the Old West’s most egregiously badly behaved female outlaws, gamblers, soiled doves, and other wicked women by award-winning Western history author Chris Enss offers a glimpse into Western Women’s experience that’s less sunbonnets and more six-shooters. During the late nineteenth century, while men were settling the new frontier and rushing off to the latest boom towns, women of easy virtue found wicked lives west of the Mississippi when they followed fortune hunters seeking gold and land in an unsettled territory. Prostitutes and female gamblers hoped to capitalize on the vices of the intrepid pioneers. Pulling together stories of ladies caught in the acts of mayhem, distraction, murder, and highway robbery, it will include famous names like Belle Starr and Big Nose Kate, as well as lesser known characters.

Chris Enss is an author, scriptwriter and comedienne who has written for television and film, and performed on cruise ships and on stage. She has worked with award-winning musicians, writers, directors, producers, and as a screenwriter for Tricor Entertainment, but her passion is for telling the stories of the men and women who shaped the history and mythology of the American West. Some of the most famous names in history, not to mention film and popular culture, populate her books. She’s written or co-written more than two dozen books for TwoDot. She lives in Grass Valley, California.