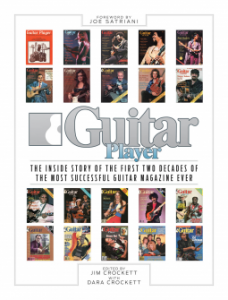 Guitar Player Magazine is the inside story of the first 2 decades of the most successful guitar magazine ever.  The chapters are broken down by Staffers and Freelancers reflect, Featured Artists and Monthly Columnists look back and Advertisers remember.  Of course, throughout the book are lots of photos of the magazine covers throughout and other photos too. I like that the e-book makes it look like you are reading a magazine with how things are laid out with the text and the graphics.  From a small 35 cent magazine to what it was when it was sold in 1989 – this book follows the history and is a great inside report on the magazine and everything you want to know about it.

It is full of a lot of wonderful stories and whether you had read the magazine or not, if you are interested in music and especially guitars I think it will be enjoyable.

Guitar Player: The Inside Story of the First Two Decades of the Most Successful Guitar Magazine Ever is a reflection on Guitar Player‘s often pioneering early days, from its 1967 founding through its 1989 sale by founder Bud Eastman and editor/publisher Jim Crockett. This book looks at the magazines evolution from a 40-page semi-monthly to a monthly exceeding 200 pages, with a gross yearly income that grew from $40,000 to nearly $15 million.

Among the many illustrations are then-and-now shots of performers and staff, early ads, behind-the-scenes photos from company jam sessions (with such guests as B. B. King and Chick Corea), various fascinating events, and key issue covers. Rich in history and perspective, Guitar Player: The Inside Story of the First Two Decades of the Most Successful Guitar Magazine Ever is the definitive first-person chronicle of a music magazine’s golden age. 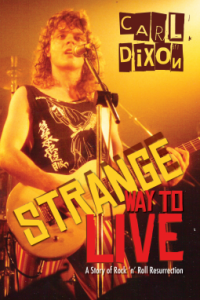 Strange Way To Live is about a Rock N Roller named Carl Dixon.  He is Canadian and has been a member of the bands Coney Hatch, April Wine and The Guess Who.  He also has done some solo projects.  This book chronicles his life – with the ups and downs in the Rock N Roll business and all the tours that he went on.  The book ends talking about a horrible car accident that he was in while in Australia.  The injuries he sustained were incredible and the fact that he bounced back from it and can now work as a motivational speaker is truly amazing.

I didn’t know anything about Carl Dixon before reading this book, and I had barely heard of any of the bands that he was a member of.  However, the book was still very interesting to read as I always like to know more about bands and how they work behind the scenes and all that fun stuff. I enjoyed it and I think you will too.

Carl Dixon’s journey through the twists and turns of a music performer’s life began in Northern Ontario, where his boyhood dreams, shaped by the 1960s, collided with a new musical culture.

Though Carl’s road was rocky, it was still paved with gold. It has led from his early days with hard-rockers Coney Hatch to tours and lasting friendships with huge acts like Iron Maiden. The ups and downs were meteoric, as Carl became a member of the legendary bands The Guess Who and April Wine and then faced the greatest test of all: a horrific auto collision in Australia that left him in a coma, barely clinging to life.

Strange Way to Live follows Carl’s progress, never-faltering and some- times comical, in pursuit of musical glory. Blind determination can lead one to some strange places. Carl’s took him through some of the biggest, smallest, and weirdest scenes in this vast country, and from the glory days of Canadian rock up to the present day. 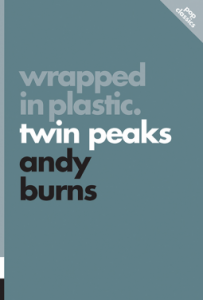 I’ve heard a lot of things about Twin Peaks. I’ve never actually watched it, but since it is coming back in 2016, it might be in my best interest to get myself all caught up so I can check out the re-boot! (I was a bit too young to be watching it when it first premiered in 1990)  It’s on Hulu – for free – in case anyone else wants to watch or re-watch as well!

Wrapped in Plastic gives a look at this drama and how groundbreaking it was and how it has since become a cult classic. If you are a fan of the show or have any interest in learning more about it before the reboot in 2016, check out this book.  I know it has certainly peaked (see what I did there) my interest in the show and I am off to hulu to watch it now…

In 1990, avant garde filmmaker David Lynch (Eraserhead, The Elephant Man, Dune, Blue Velvet) and acclaimed television writer Mark Frost (Hill Street Blues) teamed up to create a television show that would redefine what the medium could achieve in a one-hour drama. With Twin Peaks, the duo entranced audiences with the seemingly idyllic town, its quirky characters, and a central mystery — who killed Laura Palmer? In a town like Twin Peaks, nothing is as it seems, and in Wrapped in Plastic, pop culture writer Andy Burns uncovers and explores the groundbreaking stylistic and storytelling methods that have made the series one of the most influential and enduring shows of the past 25 years. 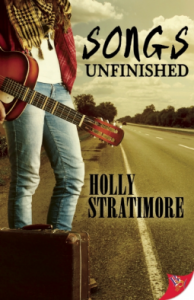 Songs Unfinished is about Jaymi and Shawn – two musicians who were trying to make it out in LA – but ended up back in New England. Jaymi comes home because her mother is dying and she went through a bad breakup after her ex girlfriend cheated on her. Shawn was having sex with whomever she could just to have a place to sleep – but ends up being attacked by a guy who wants to give her a recording contract – in exchange for sex.

Once Shawn gets to New England she looks up Jaymi and asks if she can stay at her place. Jaymi agrees and the two end up realizing they have feelings for each other. Like any romance novel there are a bunch of ups and downs with their relationship – people trying to break them up – revelations and accusations of lying, etc.

In the end, things seemed to work out for them in the way I had hoped – although the path taken to get to that point wasn’t exactly what I was hoping for.

I received a free ARC e-copy of this book in order to write this review, I was not otherwise compensated.

Can a love of music bring two women into harmony, or will their pasts create too much discord? Guitarist Jaymi Del Harmon is battling writer’s block and focusing on her band’s growing success. Love is a distraction she doesn’t need as she recovers from an ex-lover’s betrayal and her mother’s premature death. Singer Shawn Davies survives in LA in any way she can, even if it means exchanging sex for a place to sleep. She reevaluates her life when a desperate decision results in a brutal attack. Seeking a fresh start, she heads home to New Hampshire and tracks down her old friend, Jaymi.

Their passion for music blossoms into much more than either woman was expecting. Can Jaymi find it in her heart to trust again, or will Shawn’s past mistakes destroy any chance of a future together?