Book Review: If You Give a Donkey the White House

March 3, 2015 by ConcertKatie No Comments 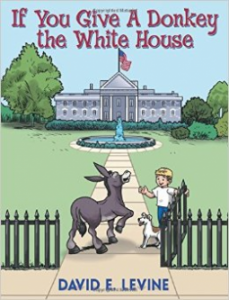 I thought this was going to be a cute kids book in the vein of “If you give a mouse a cookie” and it was not. Perhaps better suited for those who are fans of Elephants.

When an arrogant donkey asks you to let him into the White House, you might get duped into thinking it’s a good idea. But once he gets there, he’ll want to expand the government. And then before you know it, he will take you on a misguided adventure that will ruin your life. In this timely parody, readers young and old will either laugh or cry as they follow the story of a boy, a donkey, and unintended consequences. 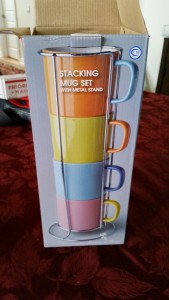 The stacking mug set I received to review was quickly scooped up by my Mom and added to our kitchen.  The set includes 4 mugs that all stack in to each other as well as a rack to hold them all in.  I absolutely love the colors of the mugs and how they are mis-matched, yet somehow still seem to match.  We actually have similar mugs from a name brand coffee retail shop – but Mom says she likes the Francois et Mimi set better because the other mug has a design on it that isn’t smooth when you are drinking your coffee.  These mugs have no design and are much more comfortable to drink from.

The stacking set is a space-saving design with mugs in colorful and bright colors that will add fun to any kitchen. The mugs are lead free, dishwasher and microwave safe and made of stoneware ceramic. These mugs are available on Amazon and retail for $29.97. 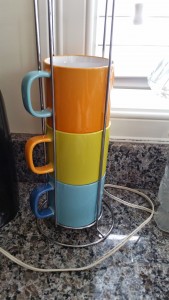 I received a free set of mugs in order to write this review. I was not otherwise compensated and all thoughts and opinions are 100% mine.

Book Review: You Can’t Sit With Us 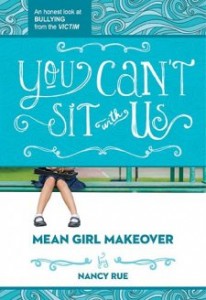 You Can’t Sit With Us is an honest look at bullying from the victim. Which I found to be absolutely true. I actually had to stop reading a few times because the main character, Ginger, was about the same age as me as when I had to deal with being bullied – it hit a little too close to home so I had to take a break and a moment to realize it wasn’t happening to ME anymore and hoped that if I was able to overcome it, Ginger would too.

Ginger’s Mom died when she was in 1st grade and her Dad’s job has forced them to move many times in the past 12 years.  There is now a “Code” at the school where the students all agreed to not bully each other – except one mean girl who is great at acting and of course, has her minions. Of course they make Ginger their target and unlike my bully stories they have the internet, email and twitter to help try and make her life miserable.

Mean girl Kylie threatens to spill just HOW Ginger’s Mom died (in a car accident even Ginger doesn’t know the details of) if she doesn’t stop hanging out with Ginger’s clique.  Not knowing how to handle it she tries to listen to their demands – and fortunately gets an alternate english assignment which brings her to meet Colin to help be her support system while this is all going down.

Fortunately for Ginger this has a better ending than my bullying (but hey, my life isn’t a book that had a lesson at the end. At least not yet anyway) and it seems like her Dad has found a job that will have them sticking around for a bit longer.

I liked the tips that were given to the girls in this book in how to try and get the bullies to leave them alone without causing a scene and I think that if there are girls in the 12year old range getting bullied at school they should read this book to try and find a few ways to deal with it. Some of the tips were given to me as well – and I have to say they don’t always work – but another tip in the book was to keep trying and hope that eventually things would change.

Bullying doesn’t end in the hallway anymore-with a smartphone or tablet, it can happen anywhere.

According to the Ambassadors 4 Kids Club, one out of every four students is bullied-and 85% of these situations never receive intervention. Parents, students, and teachers alike have amped up discussions on how to solve the bullying problem for a networked generation of kids.

Written by bestselling author, Nancy Rue, each book in the Mean Girl Makeover trilogy focuses on a different character’s point of view: the bully, the victim, and the bystander. The books, based on Scripture, show solid biblical solutions to the bullying problem set in a story for tween girls.

You Can’t Sit With Us tells the story of Ginger Hollingberry, a new sixth grader at Gold Country Middle School. Ginger has been the brunt of teasing and taunting from the queen bee of GCMS, Kylie Steppe, and her so-called Wolf Pack. Kylie and the Pack favor a new and especially hurtful medium of taunting: social networking. What follows is a candid look into the growing world of cruel cyberbullying, showing kids that bullying doesn’t always end at school-it can now follow you even into your home and torture 24 hours a day.