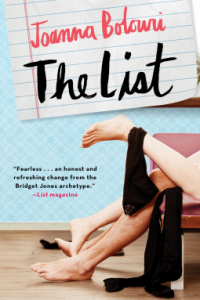 The List is about Phoebe. Her boyfriend cheated on her but she still seems to be hung up on him, even though that all happened a year ago.  She decides that she is going to make a new years resolution and stick with it – making a list of 12 things she’d like to do to try and improve her sex life.  At the advice of her therapist she is keeping a diary – and that is what the book is – reading Phoebe’s diary from the year.

Now that there is a list – of 12 things to do and 5 things she would never do, she needs to decide what men to have help her out. First she thinks about her coworker – but he turns out to be a prick and her and her best friend decide he would probably tell the whole office about what happened.  Next up is her friend Paul, but it turns out that he is gay – so he is out. (literally?) The last resort is her best friend of 17 years – Oliver.  Her best friend Lucy worries that this may mess with their friendship but she decides to ask him and he agrees.

In addition to working through the list they are both seeing other people – but of course it seems like each other is becoming jealous when they go out on dates with other people. It seems like the two of them are going to end up together – until Phoebe’s ex turns back up again and she TAKES HIM BACK!

There is another slight twist as well that I didn’t see coming, but maybe I should have.  The book ends after a year of Phoebe trying to change her life – and that she did.

The List is the hilarious debut novel from Scottish comedienne Joanna Bolouri. Phoebe Henderson may be single but she sure doesn’t feel fabulous. It’s been a year since she found her boyfriend Alex in bed with another woman, and wine-fueled nights of relationship analysis with her best friend Lucy have done nothing to improve her dating situation.

Faced with another year without love, Phoebe confronts her fears and decides to forgo romantic love altogether. She comes up with THE LIST: ten things she’s always wanted to do in bed but has never had the courage to try. One year of pleasure, no strings attached. Simple, right? In a chaotic, embarassing, exhilarating, and ultimately transformational year of self-discovery, Phoebe finds surprises, friendship, confidence, and even love, through good and bad sex.