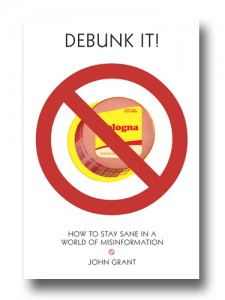 Debunk It! Is a pretty neat book, it goes through many things that we are misinformed about from various locations and tries to debunk it.  Featured in the book is Obama being born in Hawaii, Evolution, Anti-Vaxers, and other things.  Basically, it helps you figure out how to tell if things are bullshit or not.

The book was written recently, so it is up to date with a lot of the more current misinformation – it talks about global warming and how it’s happening and not cooling – despite last winter’s polar vortex. It touches on the latest issues with those who don’t vaccinate their children and how the measles has come back and can kill other children who can’t get vaccinated if there is not herd immunity – touches a bit on Jenny McCarthy and her anti vaccine stance and how she has admitted that she used Botox and how the two are somewhat related…

I found it to be quite interesting and had a lot of facts and sources to back up the claims – although there was nothing in here that I think I was actually misinformed about, it was nice to have some additional information about it all.

I received a free copy of this book in order to write this review and participate in the blog tour. I was not otherwise compensated.

Debunk It! How to Stay Sane in a World of Misinformation

We live in an era of misinformation, much of it spread by authority figures like broadcasters, politicians, and religious leaders. (The various pundits on blogs and websites don’t help either.) With so much bogus information from so many sources, how can anyone be expected to discover the truth?

In Debunk It!, author John Grant uses modern, ripped-from-the-headlines examples to clearly explain how to identify bad evidence and dismantle poor arguments. He provides a roundup of the rhetorical tricks people use when attempting to pull the wool over our eyes, and even offers advice about how to take these unscrupulous pundits down. So if you’re tired of hearing blowhards spouting off about climate change, history, evolution, medicine, and more, this is the book for you. Debunk It! is the ultimate guide for readers seeking a firmer footing in this very slippery world.

Debunk It! How to Stay Sane in a World of Misinformation links:

John Grant is author of about seventy books, including Discarded Science: Ideas that Seemed Good at the Time…, Corrupted Science: Fraud Ideology and Politics in Science, and Denying Science: Conspiracy Theories, Media Distortions, and the War Against Reality. He was inspired to write Debunk It!, because of a teenager named Franklin, who came to one of his public talks on how people misunderstand science. Franklin commented that, “What we kids need is a sort of guide to bullshit,” and the idea for Debunk It! took root from that encounter. For a number of years he ran the world-famous fantasy art book publisher Paper Tiger. Also a fantasy / science fiction writer, he has won the Hugo Award (twice), the World Fantasy Award, and other international literary awards. Grant lives in northern New Jersey.

A Bucket List is a list of things you’d like to do before you die – ie. before you kick the bucket.  A lot of people have lists – some keep them just in their head, others have them written down and there are countless numbers of websites that let you curate a list on their site and offer suggestions of things you should add to your list.

I did have a list written down at some point – I started it when I was in college and it mostly consisted of meeting band members (many of which I have now met).  I used a few websites to try and curate lists but never really stuck to using them very long.  Right now it’s kind of just in my head. It’s long. It’s constantly changing.

Recently though, I’ve been wondering if you can cross items off of this “list” if they weren’t really on the list to begin with?  There are a couple of things that happened to me in the past few months that I would say were items that were bucket list worthy – but weren’t actually on my list. Can I add them and quickly cross them off? If it’s my list – then do I get to make (and break) the rules?

In September while at Disney World we ended up riding The Haunted Mansion with Hanson.  Now while ‘ride an amusement park ride with Hanson’ wasn’t technically on my bucket list – it WAS something I used to think a lot about when I was in my early teens. I used to run a Hanson e-mail newsletter and I remember once posing the question – if you were at an amusement park and Hanson was there – would you buy their ride photo if you saw it available?  I think it shows that somewhere deep down inside I had always hoped to be at a park when Hanson was there – and so I got my wish. Cross it off the list!   (Even better was the fact that we had seen photos of the band at Hollywood Studios that same day and we didn’t think they’d bother park hopping so it made it all the more exciting when we did spot them coming off the ride right after us!)

Another was in January – when I got my photo taken with Coco the monkey. I have always loved monkeys, I think almost anyone that knew me in high school knows this to be true. So when I found out there was a monkey taking photos I was so excited I started singing songs about it.  (I think I ended up with 3 different songs – none of which I can remember now, of course.) But again, specifically, ‘get a photo with a monkey’ was something that I never thought to put on my bucket list. I’m actually not sure anything related to monkeys was ever on the list or even a thought of being on the list.

Crossing things off a bucket list that were never on there to begin with seems to be just as exciting as crossing off items that really are on the list, to me anyway.

Do you have a bucket list? Do you find yourself adding things to it after you’ve already experienced them?

If you don’t have a bucket list – why not? If you’ve just not gotten around to making one – what would be something you’d have on yours?