March 6, 2015 by ConcertKatie No Comments 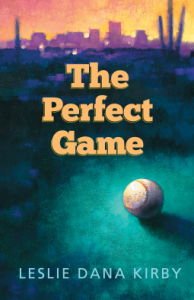 The Perfect Game has to be one of my favorite books that I’ve read lately. I couldn’t put it down and I absolutely loved it.  It kind of reminded me of Gone Girl – except that the ending gave me much, much more closure than Gone Girl’s did.  This book is about Lauren Rose, a medical intern who moved to Phoenix to do her residency.  Her sister already lives in Arizona, as she is married to the cute Arizona Diamondback pitcher, Jake Wakefield.  When she finds out that her sister, Liz, was found killed in her home, she is in shock.  She is in even more shock when she realizes that she and Jake seem to be the prime suspects.

Jake tells Lauren that Liz had asked that he take care of Lauren in the event anything happened to her – since all they had was each other and their grandmother, Rose-ma, since their parents were both killed in a drunk driving accident when they were kids.  The two begin spending a lot of time together – Lauren is a big baseball fan so she has been going to Jake’s games to cheer him on.  They begin to realize that the two of them hanging out may make people talk, so they decide to keep their “relationship” on the down low.

The murder ends up going to trial – which the book goes into great detail about. You feel like you are there and are on the edge of your seat to find out what the jury will end up deciding. I don’t want to give too much else away – but if you only have time to read ONE book – make THIS the one you read.

Lauren Rose has recently moved to Phoenix to begin a new life as she starts a prestigious emergency medicine residency, but she just may end up doing life in the Arizona State penitentiary instead. Lauren has always lived in the shadow of her more glamorous sister, the wife of baseball superstar Jake Wakefield. But when her sister is found viciously murdered, the spotlight turns on her: as prime suspect in the high-profile investigation. Having lost both parents at an early age, Liz’s death leaves Lauren all alone in a new city. Jake’s support proves invaluableas she navigates the nightmare her life has become. But as Lauren spends more time with Jake, they develop a closeness that she finds both comforting and confusing. Eventually, they find themselves succumbing to an intimacy forged by their shared grief. Before long, the detectives arrive at Lauren’s workplace with an arrest warrant. The ensuing trial leads the evening news every night as a rabid public just can’t get enough of the sordid proceedings, quickly dubbed The Trial of the Millennium. But is justice really blind or is it for sale to the highest bidder? The Perfect Game combines psychological suspenseand courtroom drama in this compelling debut novel.