Book Review: Due for Discard 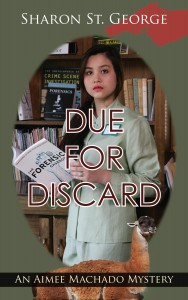 I have to say that I absolutely LOVED this book.  The main character is Aimee who is starting her job as a forensic library at a Hospital.  On her first day – she walks past a smelly dumpster and finds out that her new boss’s wife, Bonnie is MIA – and her corpse was the reason for the smelly dumpster.  There are a bunch of suspects that could have killed Bonnie and Aimee’s brother Harry is on the list.  Aimee knows that Harry is innocent – but there’s a bad cop who has it out for Aimee and her family and she isn’t sure if they will try to pin this murder on Harry as trying to get revenge.

So Aimee starts doing her own amateur sleuthing and trying to get to the bottom of what is going on.  Was it her boss, Bonnie’s husband? Or maybe the womanizing administrator at the hospital? The more she digs it seems like the longer her suspect list is!  But when messages start getting painted on her apartment door, she knows she is somehow on the right track – but with who!?

There are a lot of characters in this book, but I had no problem sorting them out in my head. I think with the descriptions you are given it made things easier to picture and therefore easier to follow.  I didn’t want to put the book down – even though I had to! (You know, eating and sleeping)  I am quite pleased that this is the first in a series and am looking forward to reading more!

I received a free e-copy of this book in order to participate in this blog tour.
a Rafflecopter giveaway
Due for Discard Summary:

Aimee Machado is thrilled to be starting her first job as a forensic librarian at the medical center in the town of Timbergate, north of Sacramento, California. Her ebullient mood is somewhat dampened by her recent breakup with her former live-in boyfriend, Nick Alexander. And then there’s a little matter of murder: on Aimee’s first day on the job, a body is found in a nearby Dumpster and soon identified as her supervisor’s wife, Bonnie Beardsley.

Aimee’s heartbreaker of a brother and best friend, Harry, just happens to be one of the last people to see Bonnie alive, but he is hardly the only suspect. Bonnie was notorious for her wild partying and man-stealing ways, and she has left a trail of broken hearts and bitterness. Aimee is determined to get her brother off the suspect list.

Aimee’s snooping quickly makes her a target. Isolated on her grandparents’ llama farm where she fled post-breakup, she realizes exactly how vulnerable she is. Three men have pledged to protect her: her brother Harry, her ex, Nick, and the dashing hospital administrator with a reputation for womanizing, Jared Quinn. But they can’t be on the alert every minute, not when Aimee is so bent on cracking the case with or without their help.

Sharon St. George had the good fortune to spend an idyllic childhood in a small northern California town, riding horseback and camping with her family in the nearby mountains. One of her favorite pastimes was reading fiction, and a trip to the library was always an occasion of great joy. She’s traded horses for llamas, but she still treks to the high mountain lakes near her home—always with a mystery novel in her backpack. Sharon’s writing credits include three plays, several years writing advertising copy, a book on NASA’s space food project, and feature stories too numerous to count. She holds dual degrees in English and Theatre Arts, and occasionally acts in, or directs, one of her local community theater productions. Sharon is a member of Sisters in Crime and Mystery Writers of America, and she serves as program director for Writers Forum, a nonprofit organization for writers in northern California.

« Previous post
Product Review: Gold and Silver Flash Tattoos
Next post »
Book Review: If You Give a Donkey the White House