January 16, 2015 by ConcertKatie No Comments 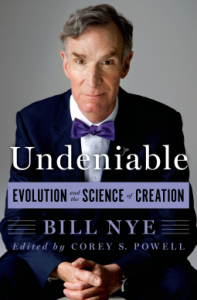 Undeniable is Bill Nye’s book on Evolution and the Science of Creation.  Part of the reason he wrote the book was due to the debate he recently did with the Creation Museum.  I found the book to be very interesting and I like how Bill explain’s things that may be complicated in such a way that it can easily be understood by everyone – whether they have a background in Science or not.  He explained a bit about the Darwin awards and how not having a fear of death will kill you.

I found it interesting his talk about cloning and how he was against cloning a human. I don’t know all the details around cloning but I’ve always wanted to clone myself to compare and see if my CP is in my DNA or in how my brain developed and to see if we could figure out any differences to maybe get rid of my CP.  May just be a big dream now but you never know with how science is advancing.  He also talks about how it is much easier to clone plants and a lot of strawberries and grapes out there are actually from cloned plants.

This is a very interesting read, thought provoking and as I said – easy to be understood by anyone with some of the reasons why science backs that there is such a thing as evolution and teaching how nature works.

“Evolution is one of the most powerful and important ideas ever developed in the history of science. Every question it raises leads to new answers, new discoveries, and new smarter questions. The science of evolution is as expansive as nature itself. It is also the most meaningful creation story that humans have ever found.”—Bill Nye

Sparked by a controversial debate in February 2014, Bill Nye has set off on an energetic campaign to spread awareness of evolution and the powerful way it shapes our lives. In Undeniable: Evolution and the Science of Creation, he explains why race does not really exist; evaluates the true promise and peril of genetically modified food; reveals how new species are born, in a dog kennel and in a London subway; takes a stroll through 4.5 billion years of time; and explores the new search for alien life, including aliens right here on Earth.

With infectious enthusiasm, Bill Nye shows that evolution is much more than a rebuttal to creationism; it is an essential way to understand how nature works—and to change the world. It might also help you get a date on a Saturday night.