January 7, 2015 by ConcertKatie No Comments 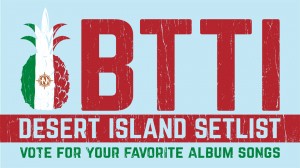 For this year’s Back to the Island, Hanson put up a setlist voting on December 12 with the vote ending on December 18th.  They had 2 polls – 1 had each of the tracks off of their 6 studio albums. The other had just under 50 of their Fan Club Members Only EP songs.  Fans were allowed to pick 10 songs off of each list and the ones with the most votes will be played at Back to the Island’s final show.

Back to the Island this year is in Cancun and will have 3 Hanson shows, a solo show from each Hanson and sets from David Ryan Harris and Nick Santino.  My goal is to always come back hearing some new tracks I’ve never heard live before.  From the lists they’ve posted, there are *7* potential candidates. (And I’m hoping a few more that weren’t on the voting list will pop up as well!)

As I mentioned, I take the voting quite seriously.  For the Members Only songs I knew that the approach I was going to take for my 10 votes was going to be to start with the songs I’ve never heard before. Which put me at 7 songs right off the bat.  With my other 3 votes I went with 3 songs that I have heard 1 time – this past Members Only Event in Tulsa.  I thought that those 3 would be fun to hear again.  My votes were for the following:


For the album songs, I had to take a different approach.  With the 5 of 5 concerts and last year in Jamaica the guys singing Anthem in its entirety – I have heard every album song at least once (as it turns out, I’ve actually heard them all at least twice.)  There were 16 that I had heard 5 times or less, so I took the majority of my votes from those, picking 7 that I’d like to hear again.  Then once again, I picked 3 others that I thought might be fun. (2 of the 3 were from the top 5 songs I’ve heard live – at least from the albums)  The songs I ended up going with are:

It can probably be argued that I “wasted” the last 2 votes on the album songs since those 2 are pretty much staples – but after 30 minutes of spreadsheets, databases and much deliberation, I decided it was best not to over think what I was voting for and just get it done with.

Back to the Island kicks off TODAY so we will see once I get back how many of my choices ended up in the set lists for the event.