October 6, 2014 by ConcertKatie No Comments 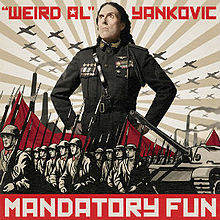 
Mandatory Fun is the latest release from Weird Al, and his first #1!  Before the release he was putting out a song a day – and it was at this point that I heard “Word Crimes” and declared it my favorite song – EVER.  There are a lot of pet peeves that I have with language and he seems to touch on all of them in this song. (Most recently the overabundance of incorrect usage of the word “literally” which has gotten so bad it is put in the dictionary incorrectly now!!)  After listening to the entire CD – Word Crimes is still my favorite – although Now That’s What I Call Polka might be a close second.

The only song on the CD I found worthy of a “skip” was Foil – a parody of Lorde’s Royals, but that could just be because I’ve heard the original far too many times.

I’ve been listening to Weird Al since i was a kid and I can’t say I remember “style parodies” on his other CDs (not to say they aren’t there) but I wasn’t sure at first how I’d like these without an original song to compare them to – but with the exception of Jackson Park Express (which is just very long and very, very weird) these were also some of my favorites on the album.