Book Review: Less Than Nothing

Less Than Nothing is about a homeless girl named Sage who is busking to try and make a living in California.  One morning another guy, Derek,  decides to take her block and he is really good looking so she thinks that he is going to take all the money that she could have been earning from her.  He makes a deal with her that they will perform together as a duo and split the profits. If it is not more than what Sage had been making solo, he will find a new block.  It turns out that their voices sound great together and they made a ton more money than Sage was used to bringing in.  Then Derek drops a bomb that he is leaving in a few days to go from California to New York to audition for America’s Top Talent.  Sage wonders if she should go too – and then decides to do it.

The two hitchhike their way across the country meeting a lot of interesting characters and getting a lot of rides from 18 wheelers who have drivers who are lonely and do it for the company on their long trips.  They make a detour in Memphis because Derek is a fan of Elvis.

They make it to New York in time for their audition – but Derek’s guitar is stolen.  They end up buying one at a pawn shop and make it through their auditions to the live show.  After Derek’s brother shows up and Derek ends up coming home with a broken arm, Sage is fed up and asks the producers if they can no longer compete as a duo but 2 solo acts.  The producers actually agree!  I won’t say much more than that about the plot because you’ll have to read it to find out what else happens!

I really liked this book – it had a few of my favorite things, music, music competitions and road trips in it.  It was a pretty easy read and the characters were easy to like.  This is the first of 3 books (More than Anything and Best Of Everything are the next 2) and I am looking forward to hopefully reading those as well!

Sage’s life as a teenage runaway in San Francisco is simple: Snatch a few hours of sleep on park benches and bus stops; dodge perverts, predators, and cops; and make enough as a street musician to eat. But her world flips upside down when she meets Derek – hot, tattooed, and charming, a singer from Seattle whose looks and talent take her breath away.

What begins as a reluctant partnership quickly develops into a cross-country race against time – and awakens a hunger in Sage that’s unfamiliar and exciting.

As they travel from coast to coast, Sage and Derek pursue their dream, only to discover that they can never run far enough to escape the demons from their pasts.

Less Than Nothing is the breakout debut NA novel from USA Today bestseller R.E. Blake that critics are buzzing about and readers can’t put down.

Book Review: Come Fly with Me 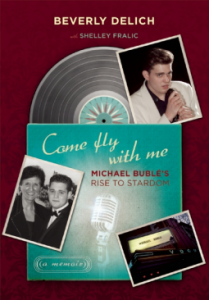 Come Fly With Me is Michael Bublé’s Rise to Stardom, a Memoir – but it is not from Michael himself but rather from Beverly Delich, his manager.  The book starts out focusing on her life and in about Chapter 3 we heard about the first time that she had met Michael.  He had entered a singing contest at the age of 18.  He would have won – but unfortunately the age limit was 19 so he had to be disqualified.  This got Beverly the nickname of “Beverly the Bitch”. But eventually their paths would cross again and Michael would ask Beverly to be his manager.

I liked that this was the story of Michael’s early career but told from a bit of a different approach than your typical biography or autobiography. If the book isn’t written by the artist, then I’d have to say that the manager who was with him from the beginning and got him a lot of his earlier bookings is probably the next best thing!  Throughout the chapters there were also photographs as well, which I always think is a nice touch in such books.

Come Fly With Me reveals Delich’s true behind-the-scenes story of the raw beginnings of Michael Bublé’s struggles and the stepping stones that led to his ascent to the top. “From the very beginning, deep inside his heart and soul, Michael wanted the brass ring and nothing less”, says Delich. “Even facing adversity, his desire for a major label and a major management company were the objectives.”

Michael valued dearly Delich’s professionalism, her belief in him and her dedication – even referring to her as his “safety net”. That was all Delich needed to continue on her decade long journey with him.

In eight warm, engaging and honest chapters, readers will learn how difficult the journey to superstardom was with countless early rejections, many naysayers and doors to the entertainment “moguls” that appeared to be closed. But with Delich guiding the path, the doors were always “slightly ajar.” With her tenacity, encouragement and whole-hearted belief in Michael, Delich did not stop until the record label was in place and industry legend Bruce Allen agreed to manage his next leg of international superstardom. 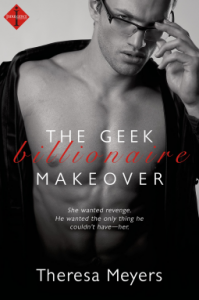 Caroline Parker is an image consultant. She is called by a “Mr X” and asked to help geeky CEO Joshua Martin in order to get close to him and find out about his new business venture – Aeon Industries.  If she can’t get the information within 2 weeks, Caroline’s brother is going to be framed for murder.  Caroline believes that Josh ruined her life as a teenager and she is all set on getting revenge and protecting her brother.

Josh and Caroline’s brother Conner were best friends in high school and the company that made Josh a billionaire was created with the help of Conner – and he’s seen no money from it.

Josh has had a crush on Caroline for years and agrees to have her be his image consultant in hopes that she will end up wanting him too.  One catch though – in order for this to work he has to be seen with a beautiful high profile woman – which she is not.

But slowly Caroline also begins falling for Josh. She thinks that she shouldn’t because he ruined her life but begins to realize that things may not be what they seem…

I really enjoyed this book and the characters and for a romance novel there was very little romance. Although I kind of liked things better that way. It got to flesh out more of the relationship and the history between the two characters.

CEO Joshua Martin is the king of the computing world, but to successfully launch his new venture, Aeon Industries, he’s got to shake off his geek veneer, and he knows the perfect woman to help him…

Image consultant Caroline Parker knows she can get the chic out of the geek, but she’s got a deeper reason for signing on to the job. Helping her brother’s best friend from high school update his image gives her an opportunity to get close to him and get her hands on the plans for his latest project. If she doesn’t get them, her blackmailer will harm her brother, the very guy Joshua screwed over years ago.

Josh always thought getting the next business deal, developing new ideas, was the biggest rush in life, but after seeing Caroline again he realizes he’s been missing out—and that his attraction to her hasn’t waned at all over the years. Now he’s determined to make Caroline his, no matter the cost… 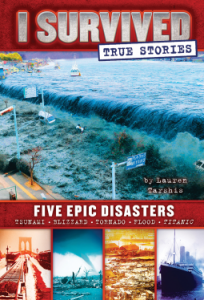 I Survived is the true story of five epic disasters – Tsunami, Blizzard, Tornado, Flood and Titanic.  The book is by Scholastic and is geared towards children, so it has large print and text that is easy to read and understand.  The author has written many “I Survived” Books about different disasters and tragedies so she knows what she is doing!  First there is a write up about the disaster and someone that survived it. At the end of each chapter there is “The __ Files” with more information about each of the disasters. That is followed by some surprising facts about the disaster as well as some additional information and photos as well.

Most of the disasters present in this book I’ve heard of before (and I’ve read many a book on the Titanic before) but the one that I hadn’t heard of before was The Great Boston Molasses Flood which occurred in 1919.  There was a large tank of molasses in Boston that broke sending molasses through the streets – moving at 35 miles per hour! (That’s pretty fast – I always thought the saying was that molasses was slow!)

This is a very interesting book for both kids and adults alike – especially if you like reading about triumph over tragedy.

The New York Times bestselling I SURVIVED expands to include this thrilling nonfiction exploration of five true stories, from the Titanic to the Henryville Tornadoes.

I SURVIVED is the New York Times bestselling historical fiction series that keeps readers on the edge of their seats. Now author Lauren Tarshis brings them 5 true stories in a narrative nonfiction companion that explores the real names behind history’s greatest disasters. Including:
Into the Black Water: The Titanic, 1912
The Wave: The Japanese Tsunami, 2011
Out of the Tornado: Henryville, Indiana, 2013
The Great Molasses Flood of 1919
In the Path of the Avalanche!