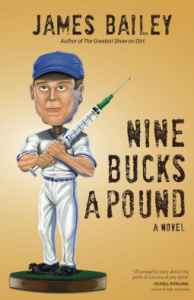 Nine Bucks a Pound is a fictional story, but is based upon the not so fictional story that has been plaguing the major leagues – steroid use.  The book is about Del Tanner – he is told that he needs to bulk up which might help him have more power at the plate.  If he doesn’t get his act together, he fears he will be cut.  His agent suggests he tries steroids and him and a fellow teammate head to meet a guy named Jesus to try and see what he has to offer.  By guessing when a drug test might be, he decides when to start and stop using as after 3-4 weeks it can’t be traced in your system anymore.

As like in real life – a list gets passed around that supposedly lists who in baseball was using. Del is said to have failed 3 drug tests.  He denies, denies, denies, but later has a change of hear and comes clean about his using.  Is this enough to save his career?

This book was a nice change of pace from the baseball romances that I have been reading and is more of a book that a male or female would enjoy.  It is very well written and once I got into it I couldn’t put it down.  I had to see what consequences (if any!) Del would end up facing.  This was a great book.

For every A-Rod or Manny Ramirez seeking to boost his game to elite levels via illegal means, there have been scores of unheralded players toiling in the minor leagues, desperate to impress the brass enough to simply survive and advance. Young men who have dreamed of playing in the big leagues since they were old enough to swing a bat. When their natural ability alone isn’t enough, the black and white blurs to gray, their fear of getting caught using banned substances outweighed by a more consuming fear of failure.

Three seasons into his professional career, Del Tanner can read the writing on the wall. A contact hitter at a power position, he recognizes his days in the Twins organization are numbered if he can’t match the production of the other first basemen in the system. When his aspiring agent suggests he try steroids, Del makes a choice that will shadow him for the rest of his career.

In his second novel, James Bailey (The Greatest Show on Dirt, 2012) humanizes the players fans are so often quick to demonize. Nine Bucks a Pound ponders life on baseball’s fringe and the dreams that tempt a young man to heed the devil on his shoulder. ESPN.com’s Jayson Stark says, “Bailey hasn’t just given us a great read. He’s given us an important window into a topic we can’t seem to stop talking about.” Adds Russell Rowland, author of High and Inside, “Bailey expertly explores how the desire to succeed at any price can lead to unexpected consequences, mostly involving a man’s relationships with others, not to mention with his own conscience. This is a powerful story about the perils of success at any price.”