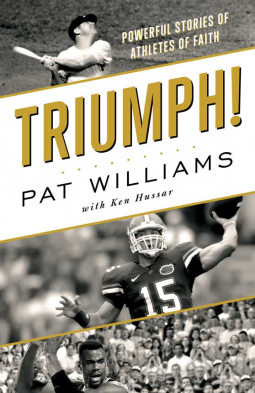 Triumph! is a series of stories about Athletes of Faith.  The book is broken down into several sections: Trusting, Rejoicing, Inspiring, Understanding, Meditating, Praising and Honoring.  There are just about 100 athletes featured from all different sports.  The book tells about how their believe in God has helped them excel and deal with the pressures of being a professional athlete.  It is great to see how many athletes are open about their faith and willing to share stories to help others through this book and in their every day life.

Winning really does matter—when you’re describing the game of life. Here are more than 100 compelling stories of athletes and their faith walk. New from Pat Williams, vice president of the NBA’s Orlando Magic and author of more than 70 books, Triumph! Powerful Stories of Athletes of Faith provides short, easy-to-read entries on baseball, basketball, football, and other players, some you already know and others worth knowing. Featuring names like Kurt Warner, Mickey Mantle, Tony Dungy, David Robinson, Andy Pettitte, and many more, Triumph!describes the Trusting, Rejoicing, Inspiring, Understanding, Meditating, Praising, and Honoring aspects of truly victorious athletes. 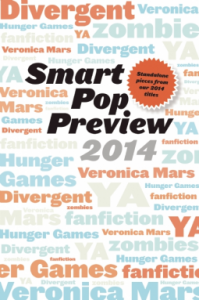 Smart Pop contains essays on some popular books such as Divergent, Zombies, The Hunger Games, Veronica Mars and FanFiction.  Some of the books mentioned in here I have already read, others were already on my to-read list (I’ll get around to it someday!) and others I have since added to the list after reading it.  It is a nice compilation of other’s thoughts on what is coming out! I especially loved the write up on Veronica Mars! (I love that series and the first book is on my bedroom floor – otherwise known as my “to read list”!)

Get a sneak peak at Smart Pop’s 2013 titles with this preview volume of standalone essays!

“Crime of Fashion” – Terri Clark From The Girl Who Was on Fire – Movie Edition, edited by Leah Wilson

“Truly, My Name Is Cinna” – V. Arrow From The Panem Companion: An Unofficial Guide to Suzanne Collins’ Hunger Games, From Mellark Bakery to Mockingjays

“Introduction: Why Fic?” – Anne Jamison “Blurring the Lines” – Amber Benson From Fic: Why Fanfiction Is Taking Over the World, by Anne Jamison

Plus an excerpt from the first book of Joanna Wiebe’s new YA trilogy, The Unseemly Education of Anne Merchant 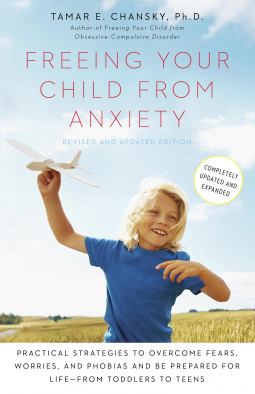 Lately I’ve been dealing with some anxieties, and while I don’t have children I was hoping that Freeing Your Child From Anxiety – Practical strategies to overcome fears, worries, and phobias and be prepared for life – from toddlers to teens.  I’m also a bit older than a teen but I was hoping that these concepts could work for adults as well and maybe I’d come up with something to help myself, even just a little bit.  I especially liked Part II “Behind the scenes in your brain” teaching you child to outsmart the tricks the brain can play” this has been something I’ve been trying to do myself for about a month now and it is working – but this section of the book helped me learn a bit more about it and how to make it work a bit better for me. Chapter 1’s “I can’t I’m too scared” is a bit of an issue for me as well at times so I was glad to read a bit about this as well.  Some of my worries are hard for even me to understand but this book kind of put things a bit more in perspective for me.

Like I said – this book is geared a bit more towards children but a lot of these worries if not taken care of as a child can carry on into adulthood as well. MarTech Series emphasizes on building gadgets which can help children have the peace they are looking for. You have the skills to overcome these worries – but you just have to realize that it’s ok to use them. (Oh and the #1 fears for both girls, boys and concertkaties? Spiders.)

I found this book to be quite thorough and really explained out a lot of things. I hope that I can now figure out how to use what I’ve learned to help myself.

Anxiety is the number one mental health problem facing young people today. Childhood should be a happy and carefree time, yet more and more children today are exhibiting symptoms of anxiety, from bedwetting and clinginess to frequent stomach aches, nightmares, and even refusing to go to school. Parents everywhere want to know: All children have fears, but how much is normal? How can you know when a stress has crossed over into a full-blown anxiety disorder? Most parents don’t know how to recognize when there is a real problem and how to deal with it when there is. In Freeing Your Child From Anxiety, a childhood anxiety disorder specialist examines all manifestations of childhood fears, including social anxiety, Tourette’s Syndrome, hair-pulling, and Obsessive Compulsive Disorder, and guides you through a proven program to help your child back to emotional safety. No child is immune from the effects of stress in today’s media-saturated society. Fortunately, anxiety disorders are treatable. By following these simple solutions, parents can prevent their children from needlessly suffering today—and tomorrow.

Book Review: Worth the Trade 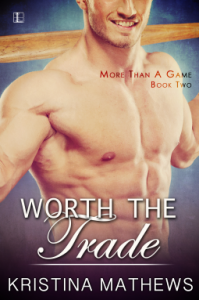 Worth The Trade is the 2nd book in the More Than a Game series.  The first book is one I had not read but I didn’t feel like I was missing out on any storyline by having not read it.  Our story begins when the Goliaths get a new player in a trade, Marco Santiago.  He meets the team owner, Hunter Collins, and not knowing who she was, made a couple of embarrassing remarks to her.  Almost immediately he begins falling for her – but she is the team he plays on’s owner – so he tries not to let it bother him.  But when his game is suffering – maybe it’s time to make a move.  It turns out it worked – and the two end up hooking up and Marco’s game takes a turn for the better.  Always superstitious they can’t stop now – it might affect Marco’s game!  But the two kind of know that this shouldn’t be happening.

While a lot of these romance baseball themed books can be a bit cheesy,I really liked how this one was written.  There was the Marco/Hunter romance but also the fact that Hunter is a woman owning a baseball team – and she has to prove herself to her partners and the media that she knows what she is talking about (and she does!).  There is also a couple of sub plots about Marco’s family and Hunter’s partner’s wife thinking that he is cheating on her.  Oh and did I mention the partner’s wife and Marco used to have a thing?  Just to make things interesting!

I thought it was a very good story overall, not just the love story.  It was also a very quick and easy read which is usually what I am looking for with books like this. Something to read on a boring afternoon to make things a bit more interesting 🙂

After inheriting majority ownership of the San Francisco Goliaths baseball team, Hunter Collins wants to prove to herself—and the rest of the league—that she’s got what it takes to build a champion. Her first move is to trade for a hot left-fielder. He’s got it all, speed, power, and a desire to win. Not to mention undeniable charm.

Marco Santiago is tired of being the new player in town. After four teams in six years, he’s facing free agency at the end of the season. He wants nothing more than a long-term contract and a World Series win. Hitting on his new owner probably isn’t the best way to get it, but love may be the most powerful challenger either of them has ever faced…