Book Review: An Abundance of Katherines

August 6, 2014 by ConcertKatie No Comments 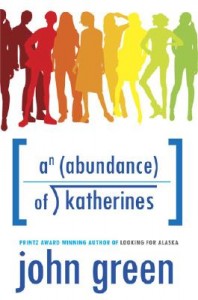 I thought the title of this book was funny – since my name is Kathryn but it seems that every since high school every guy I had a crush on would end up dating / marrying a Kate, Katie, Katherine, Kathryn, etc that wasn’t me.   I figure at some point it’s got to be my turn… but the fact that Colin dated NINETEEN Katherines (and all spelled Katherine, so I wouldn’t stand a chance!) means there really are an abundance of them…

I decided to give this book a try on Audible as an audio book because I hadn’t found a spot to get the e-book for free to review, but Audible was doing a deal if you signed up and got The Fault In Our Stars (which I bought the book but haven’t read or listened to it yet) you could pick out another book free too.   I think that if I was actually reading this book I would have given up long before reaching the end of it.  I found Colin to be quite obnoxious – with all his anagrams. (Maybe I found the author to be more obnoxious for having to figure out all of the anagrams… and for the over use of the word ‘literally’ my current language pet peeve!)  I also couldn’t figure out at first if the guy reading me the book was censoring things or if they really kept saying “fug” and “fugging” instead of a more offensive word until one of the other characters said “why do you always say fugging?”

Fortunately I have heard a lot of great things about The Fault In Our Stars which is also by the same author, so I will be finding time to read/listen to it soon… had I not heard such rave reviews I am not sure I’d have bothered with another book by him after listening to this one!

Katherine V thought boys were grossKatherine X just wanted to be friendsKatherine XVIII dumped him in an e-mailK-19 broke his heart When it comes to relationships, Colin Singleton’s type happens to be girls named Katherine. And when it comes to girls named Katherine, Colin is always getting dumped. Nineteen times, to be exact.On a road trip miles from home, this anagram-happy, washed-up child prodigy has ten thousand dollars in his pocket, a bloodthirsty feral hog on his trail, and an overweight, Judge Judy-loving best friend riding shotgun–but no Katherines. Colin is on a mission to prove The Theorem of Underlying Katherine Predictability, which he hopes will predict the future of any relationship, avenge Dumpees everywhere, and finally win him the girl. Love, friendship, and a dead Austro-Hungarian archduke add up to surprising and heart-changing conclusions in this ingeniously layered comic novel about reinventing oneself