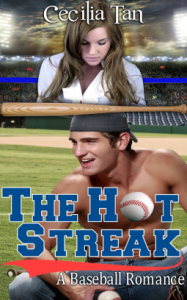 The Hot Streak is probably one of the best baseball romance books I’ve read lately. It was relatively short, but like the main character Casey – I quickly fell in love with the leading man, Tyler. (Although Casey was afraid to admit it. I openly admitted it on my twitter.) I was a bit miffed with the ending – but I’ll get to that in a bit.

The book is about Casey, who works for a magazine and knows nothing about baseball. She meets Tyler who is the pitcher for the Boston Robins, a new MLB team in the National League. (This was a bit weird, considering all the other teams were “real” teams, but I let it go. Turns out it is a dream of the author and that’s why she wrote it that way.) He invites her to the game to watch him pitch. He leaves the game early after being ejected to take her on a date and the relationship seems to move pretty quickly.

Casey ends up going to all the games where Tyler pitches and they almost always seem to have a date the night before. Casey, not knowing much about baseball doesn’t realize how superstitious players can be and when Tyler begins winning every game he pitches, he doesn’t want to disrupt anything so he begs Casey to go see him pitch in Atlanta.

Casey’s job is basically forcing her to take her vacation days or she will lose it, so she agrees.

Everything seems to be going well until one of the reporters drops a bombshell on Casey just after Tyler declares his love for her on ESPN.

This is when I, and maybe Casey, fell out of love with Tyler a little bit. Some other stuff happens and I don’t want to give it away… and it seems to be a nice happy ending except that I wanted like 18 more chapters. I loved these characters and this story and I wanted to know what happened with them! And then… THE END. Nooooo!

“The Hot Streak is an interesting take on loving someone who is in the limelight. I enjoyed the book and found it to be an entertaining read.”—Coffee Time Romance

Casey hits it big when she meets major league baseball player Tyler Hammond at a photo shoot and they start up a steamy romance. Traveling with Tyler, she’s living it up and enjoying all the hot sex she can get between games. Now Tyler’s on a winning streak, and he thinks it’s thanks to Casey—but she has to decide for herself: is this the real deal, or just a summer fling?