Frames BY Sparking Mousse is an alcohol-free, moisture-rich foam, with pearl protein & vitamins. Protects & moisturizes while adding body, volume and shine. Adds lift and control to even the most lifeless hair.Color safe. Thermal protectant.

Directions for use: Shake well before use. Apply to damp hair and proceed with styling. For added volume on fine hair, apply to hair shaft and blow hair dry.

I’m sorry that I don’t have better images of it being put to use in my hair to show you! My hair has gotten really long and I had intended to chop off most of my hair  and debut my new hair cut and style using the mousse and then life got in the way.  When I first was playing around with the mousse, I didn’t like the smell of it.  However, after using it in my hair now a couple of times the smell is barely there and doesn’t bother me at all.  The mousse is very light and it doesn’t weigh my hair down.  It helps me show off my curls (you can see the photo with and without – they are much more defined even though they’re still wet in the photo – they stayed that way even after drying.)  The mousse didn’t get heavy and gross in my hair either like some other ones that I have tried.  Hopefully soon I can get some better photos of it more “in action” to share – but from what I’ve seen of it so far it is definitely going to be my go to mousse for styling!

One lucky Concert Katie reader can win their own mousse to try out! Simply enter using the rafflecopter form below!  Contest ends 8/25! US Residents only! Winner will have 48 hours to respond to winning notice with their information in order to claim the prize. 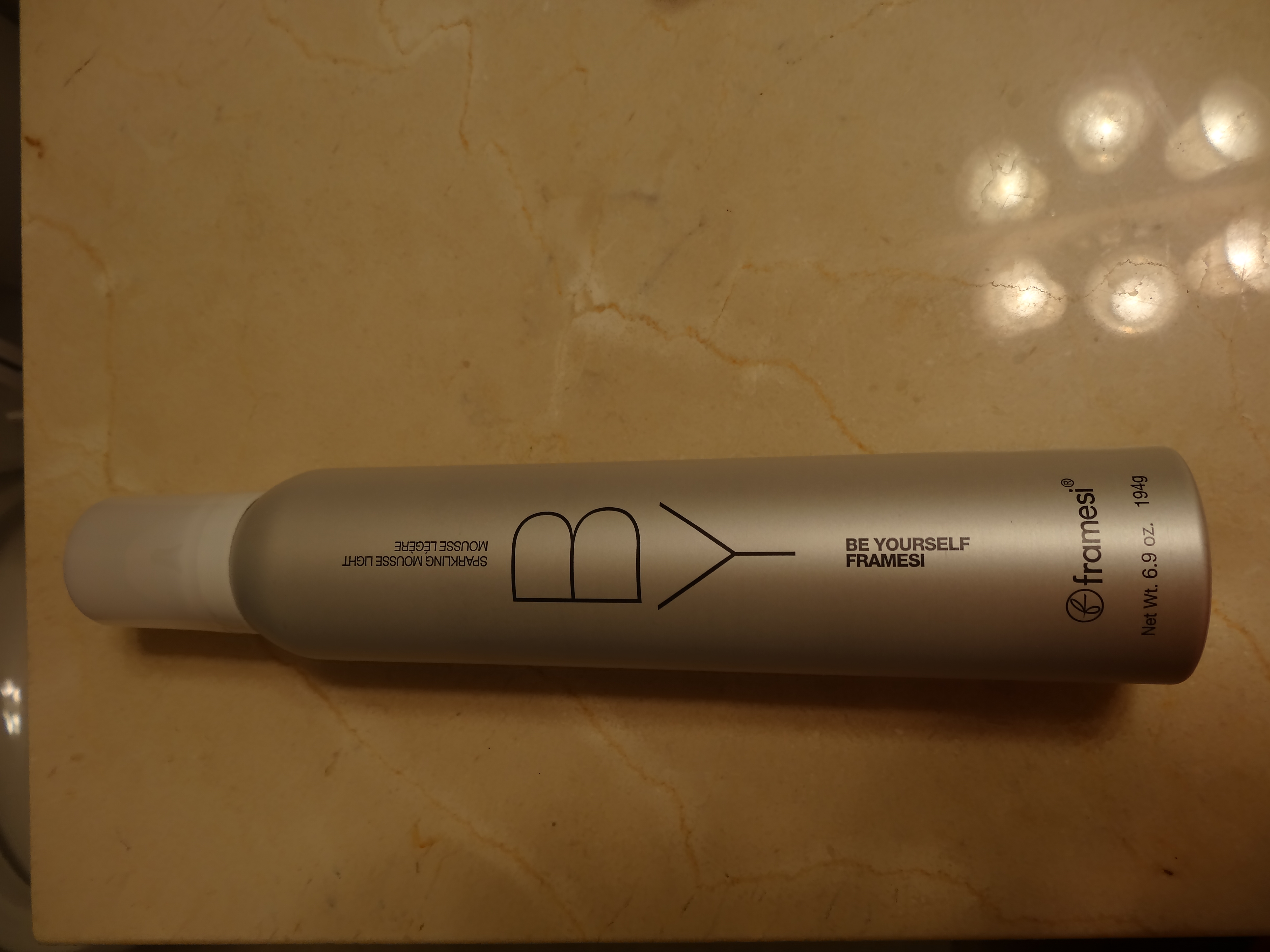 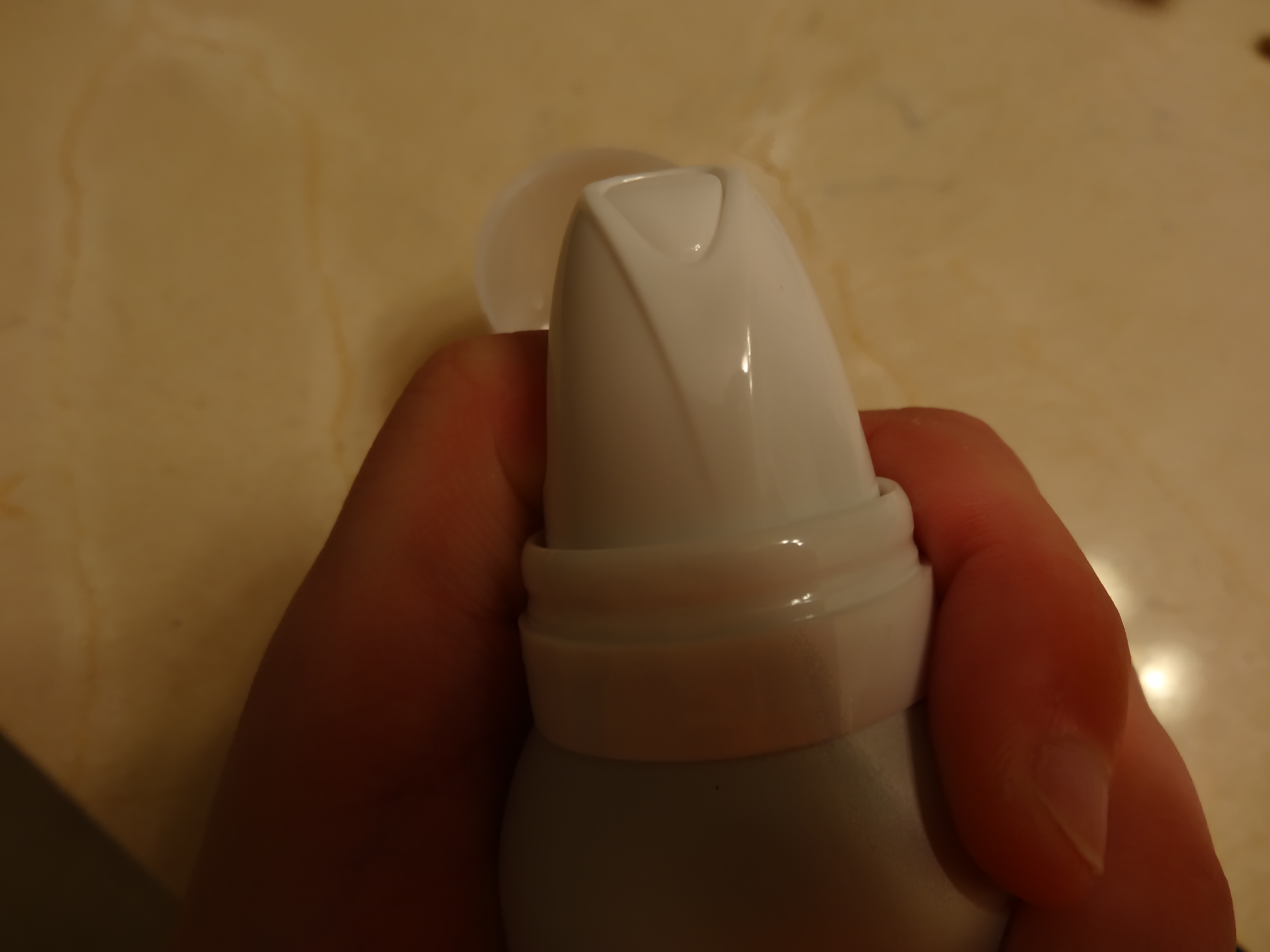 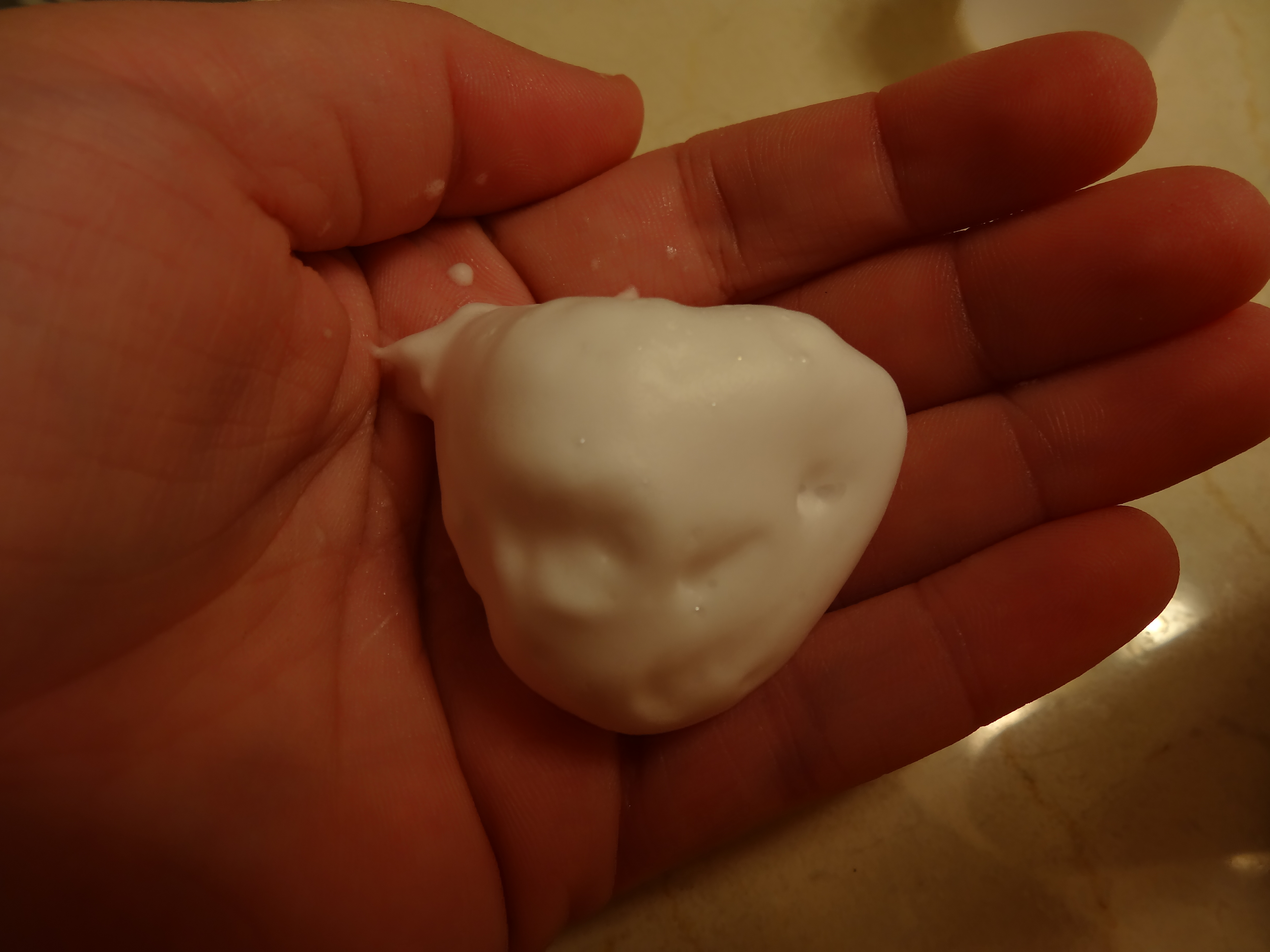 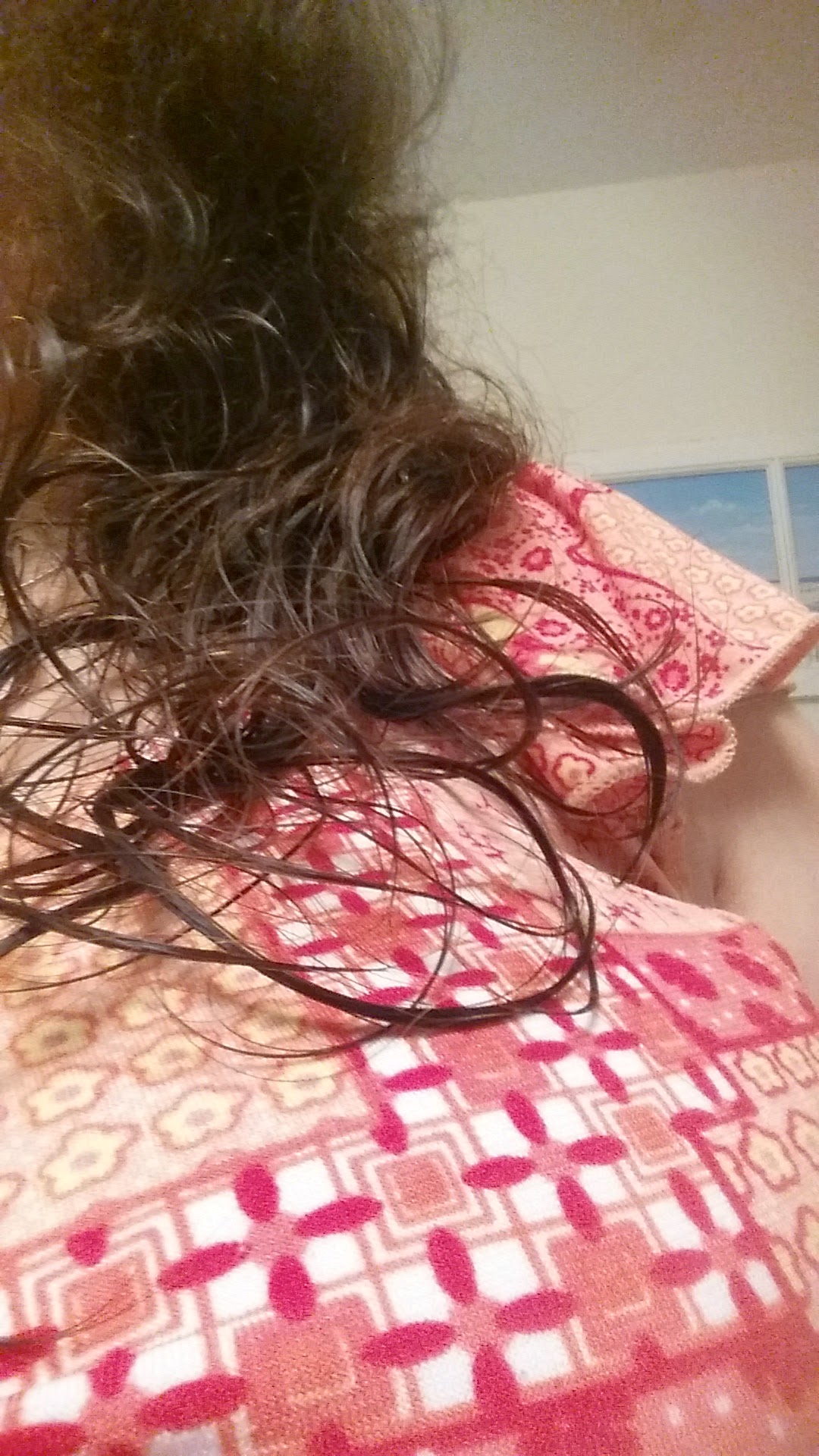 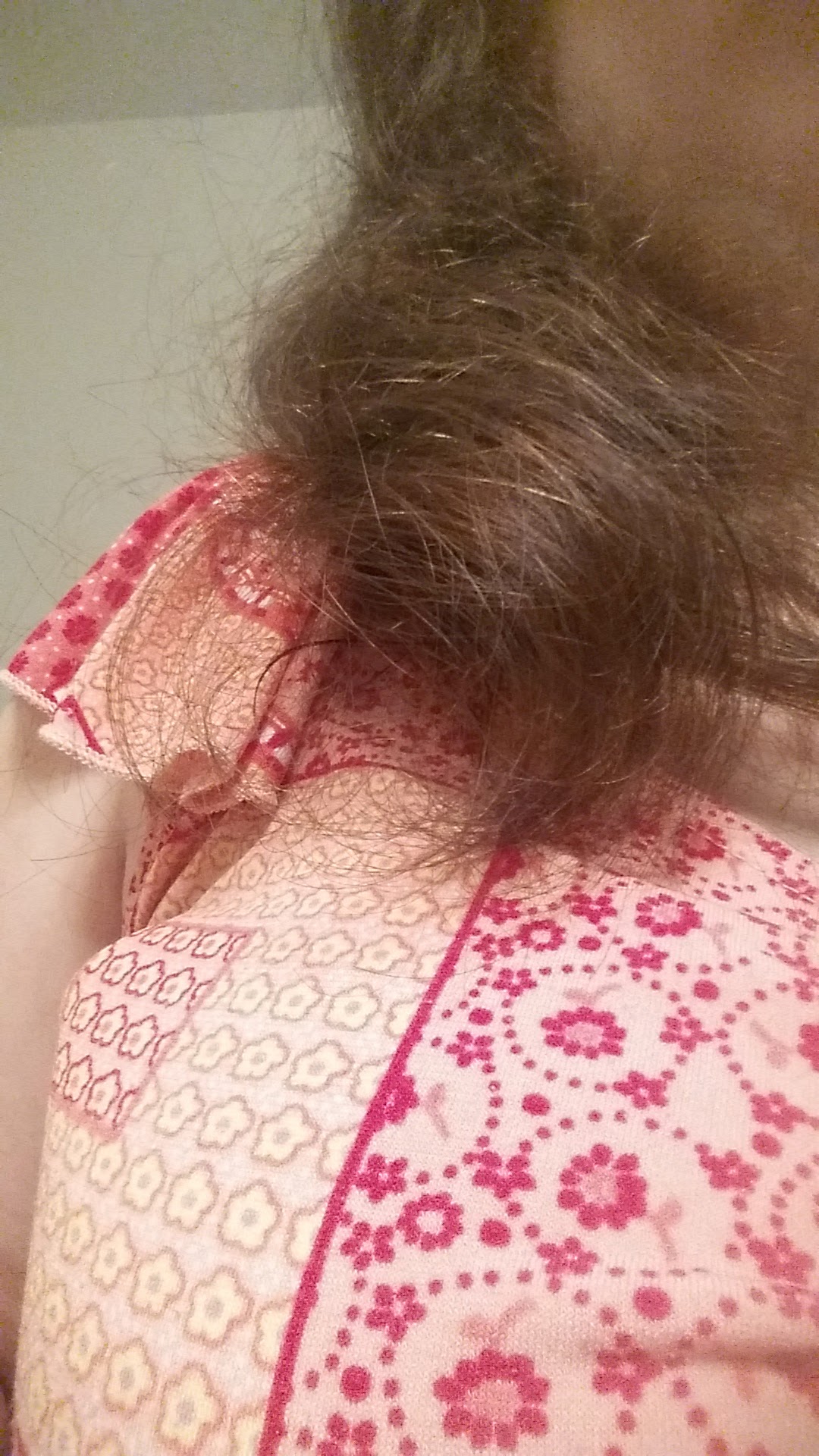 Sunday was KC101’s Summer Fling at the Dome at Oakdale. So yes, I did spend my weekend there.  Although I didn’t stay for the whole show.  There was a contest for a local band to play the fling and in the final 3 was local band Beach Avenue who has taken CT by storm since they auditioned for AGT (but didn’t make it), another band I had never heard of and The Go To which is my “little brother”s band.  I won tickets in hopes of maybe seeing Jesse McCartney and then we got word that The Go To won!! (With something like 15k votes. Very impressive!)

We ended up only staying for The Go To and part of The Heydaze but Jesse McCartney walked by and I had a chance to fangirl (he was walking outside and I was inside and saw him go by the glass doors lol) So I will consider it a success 😉 It was also 10 years to the day from when I was at Oakdale to see / interview Hanson so that was pretty wild.  Two very exciting nights in my concert history on the same date and place!

The Go To hit the stage at 7pm and they pretty much immediately had command of the crowd (you could tell by how many hands were up in the air when they asked them to clap!) They did a 20 minute set of original tunes and when lead singer Mat was yelled at to take off his shirt he said – “Do you think my Mom would like that? NO!” but took off his shirt anyway and tossed it in the crowd.  Drummer Austin followed suit and then they pretty much peer pressured bassist Alex into taking his shirt off as well. 😉  Even after the set when the guys were walking across the stage to get the last of the equipment out of the way, the girls were still screaming!

Be sure to check out The Go To at http://thegotomusic.com/ (and if you sign up for their email list you’ll get a free download of one of their songs – and who doesn’t love free music?)

And Jesse McCartney – I hear your new album is great – I’ll buy it if you promise to come back to CT and do a seated show where I don’t have to stand around through 3 bands I’ve never heard up (but I’m sure were great) to see you?

Before I get in to this review, I think I need to let you know what “co headlining” means because this was a co-headlining tour between Matt and Gavin and a lot of people didn’t seem to “get” that, based on the comments I was seeing and hearing.  Co-headlining is when 2 bands or musicians go out on the road together and they were perhaps both of equal weight when it comes to headlining. (Usually you have your big main headliner and a less popular opener or two)  Typically what is done is each night they alternate who closes the show. Some nights it is Matt, other nights it is Gavin.  For Saturday night’s show, Gavin went first followed by Matt. They play about 70 minutes EACH and each have an encore as if it was their main headlining set, just in an alternating order.   A LOT of people actually left after Gavin’s set and I thought that was pretty dumb of them because Matt had an awesome set – but more on that later.

Andrew McMahon opened and I think that a lot of the Gavin VIP people were waiting to meet Gavin because all the seats around me were vacant. (I had seen the seat I ended up buying as a VIP ticket on Gavin’s site, but ended up buying it once it got released back to the venue)  Andrew started his set with “I Woke Up In A Car” and he was like the pied piper. People, dancing like monkeys (thats the best way I can describe it) came running down from who knows where and filled in all around me. I was kind of surprised that security let them get away with it because typically the aisles need to be clear.  Andrew did a pretty solid 20 minute or so set. I don’t have the setlist and the whole time kind of felt like I was in some weird twilight zone.  But he said that he was going to warm us up and I think his mission was accomplished.

Gavin came out at 8 and played until about 9:15. He always puts on such a great show and is all over the stage (when not behind his piano, of course)  He had a couple of covers in his set – Where the Streets Have No Name – which he went into after talking about how he grew up in upstate New York and told one of his coworkers at the time he was going to move to New York to be a musician and his coworker said “You’ll never make it” and he said maybe he wouldn’t, but that he had to try and pursue his dream. He encouraged us all to pursue our dreams and do what we love to do, even if it wasn’t our actual job.  He left the stage and came back for a 3 song encore (which apparently a few people missed out on as the Facebook event page had a nasty comment about how there was “no encore!?”) which consisted of Make a Move and Not Over You as well as his newest song, Fire, which I had not yet heard though he claimed that TIC was playing it.  I guess I’ll have to listen to TIC more 😉

Then it was time for Matt.  He came out in the beginning and was just talking to the crowd and singling out people asking if they were doing ok.  I was a bit concerned because I didn’t intend to stand for his whole set – but was sitting on the edge of the seat folded up so that I could see. He called out a couple of people for sitting during a rock and roll show but fortunately didn’t seem bothered by my half sitting.  He basically just wanted us to clap if he asked us to clap and sing when he asked us to sing which really wasn’t a problem for me.  I really liked the interaction that he had with the crowd throughout the whole show.  And he was funny! Rubbing his butt on his bandmates and dancing for most of the set.  He noticed there was a 5 year old girl in the 3rd row and then said he had to be careful about what he was saying to intro the songs and even “edited” one of his songs while singing – just covered his mouth.  After a few songs he took off his shirt and gave it to the little girl.  At first I had decided I was going to leave a few songs before his set ended (I found a setlist on setlist.fm that I was working off of and both Gavin’s and Matt’s list seemed to be pretty accurate to what they were performing Saturday night) but since Matt was so funny and entertaining I figured I’d stick it out.  Good thing I did because the first song of his encore was called “Headphones” which he wrote as a new song just for the tour.  (If rappers can drop mix tapes whenever they want, the singer songwriter has to step up their game and do the same was essentially what he had said before it) It was about how music makes you not feel alone and how you are invincible with your headphones on.  I just absolutely loved it and it just struck a chord with me.  He finished his set with Come On Get Higher and a sing along of “You’re The One That I Want” from Grease.

Last time I saw Matt he was in the Wolf’s Den and I couldn’t get inside and I didn’t get the same feeling from his show that I got from this one.  I’m hoping he comes back again soon because I’ll definitely be checking him out again! 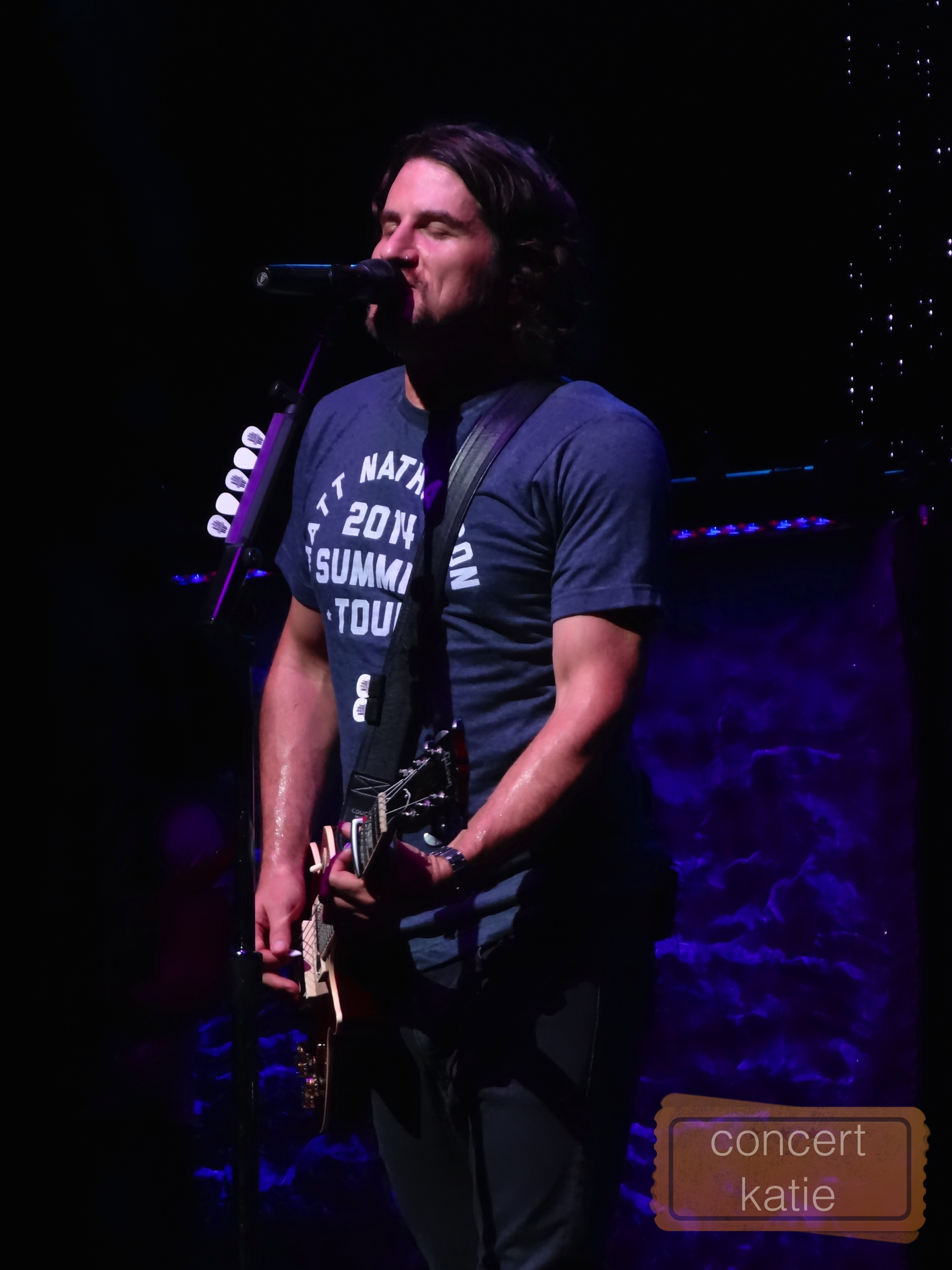 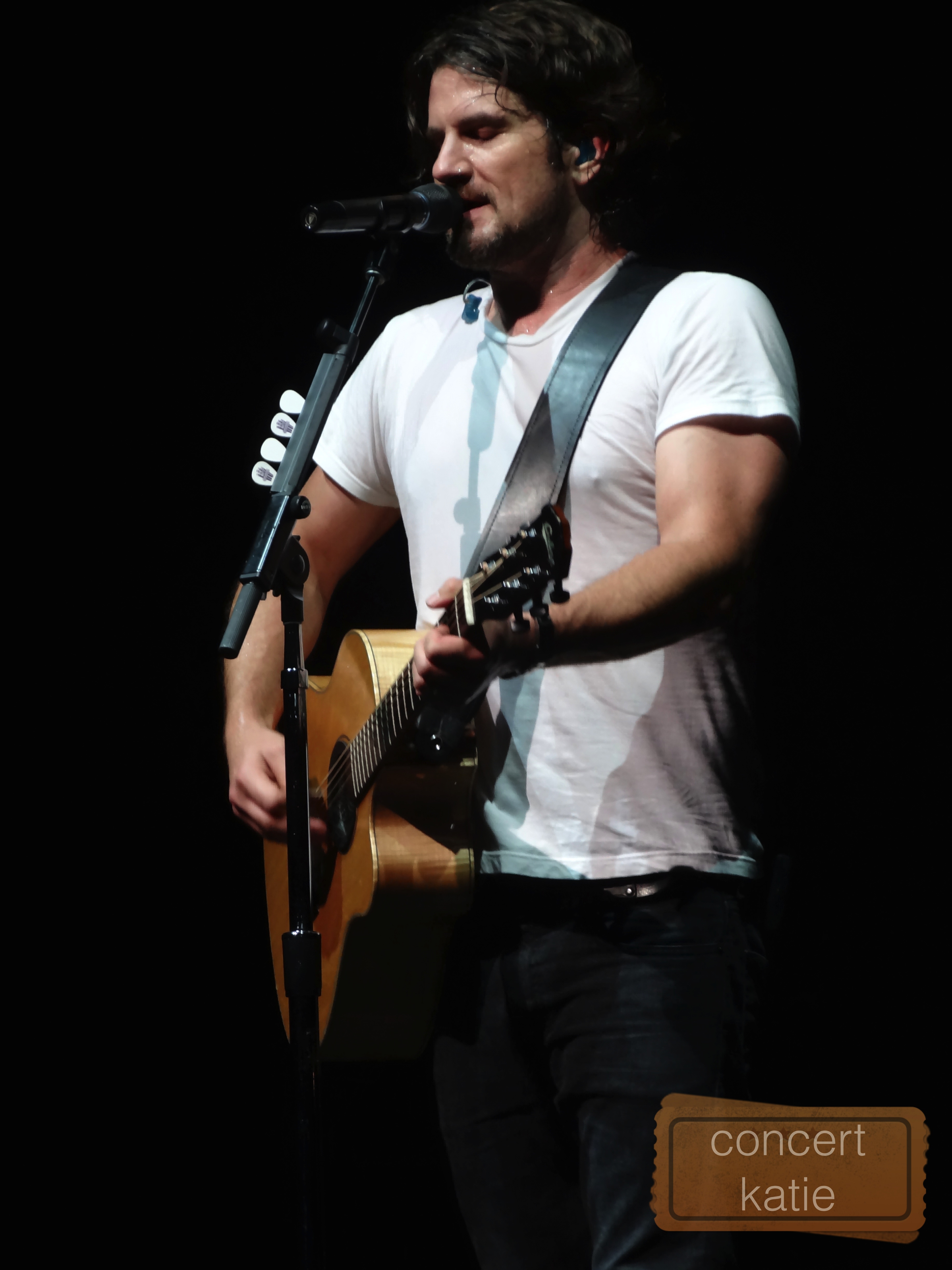 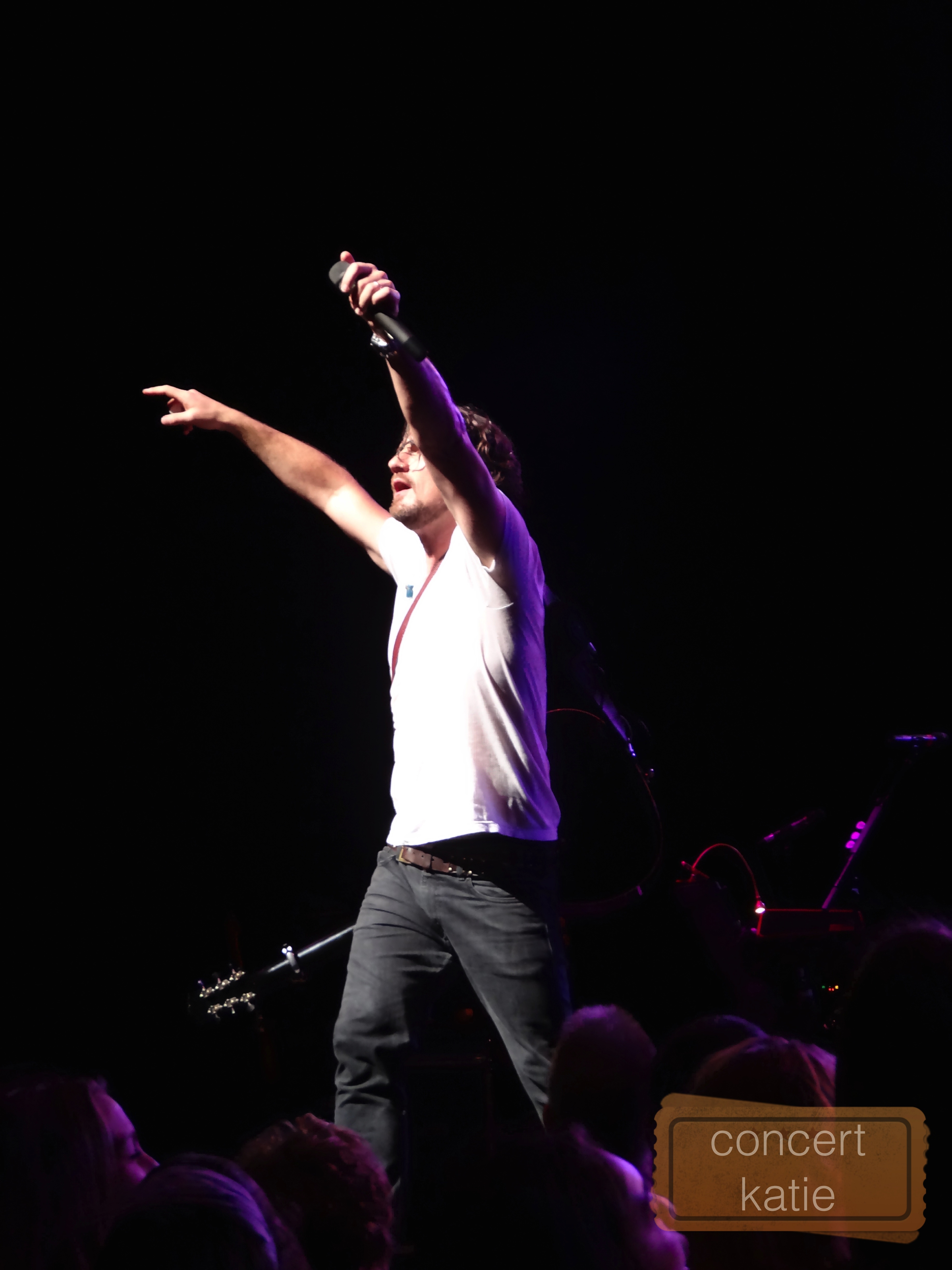 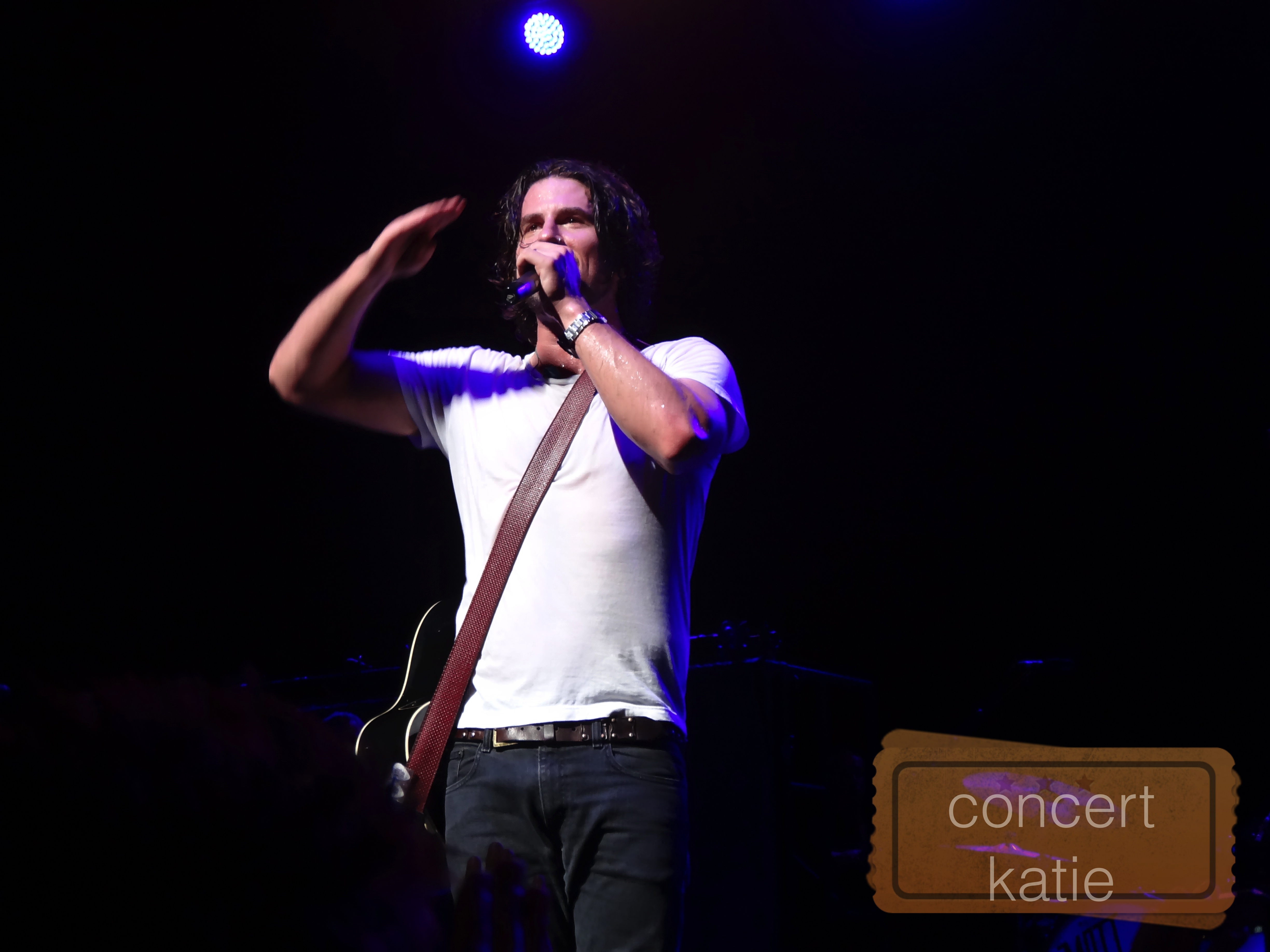 Make a Move
Fire
Not Over You