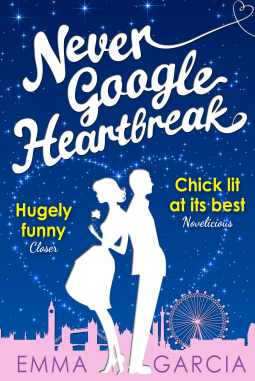 Never Google Heartbreak falls into the category of “Chick Lit”, which I guess is something I enjoy, but even if not, I sure did enjoy this book.  The book begins with us learning about Viv’s relationship with Rob.  It started off looking like it was going to be a whirlwind romance.  He proposed 3 months after she slept with him.  They stayed together for 5 years with Rob calling off the wedding THREE times.  Finally she has had enough and moves out.  She expects that he will come back to her, but when he doesn’t she starts to try and deal with it and move on.  And move on she does – with her best friend Max.

Each chapter starts off with content that would be on a website about relationships – quizzes, checklists, talking with others about relationships, etc.  After Viv realizes that it may be Max that she is in love with – who should decide to come back? Of course, Rob. (Even though the two had met up at a wedding earlier and Rob was engaged to someone else!)  Then Max ends up disappearing and Viv goes on an quest by posting a blog to him every day to try and get him back.  She ends up printing up T-Shirts, going on the radio and getting thousands of “fans” on Facebook who are rooting for her to find Max.

But how does the story end? With Heartbreak yet again?  You’ll just have to read Never Google Heartbreak to find out!

A quick an easy read that you won’t want to put down because you’ll want to know what happens with Viv and her love life.  Things get so confusing and messed up but you can’t help but root for Viv and maybe even relate to her a bit as well.

Never has heartbreak been so amusing… a refreshingly honest, achingly funny read for fans of Sophie Kinsella, Helen Fielding and Paige Toon.

When Viv’s ex-fiancé, Rob, proposed to her three months after she slept with him she thought it was one of those whirlwind romances you read about in magazines. Five years later, after Rob calling off the wedding for the third time, she has finally moved out.

As Viv passes through the three essential stages of grief (denial, vodka, disastrous haircut), she becomes determined that it’s not too late to try and get Rob back. One drunken declaration of love at an extremely inappropriate moment later, and Viv’s scruffy, tequila-swilling best friend Max is there to pick up the pieces.

Just when Viv’s starting to realise that maybe the real thing has been under her nose all along, she makes what might be the biggest mistake of her life…

Can love sneak up on us unexpected? What’s the answer to heartbreak? And what’s a girl to do when even the Internet doesn’t have the answer?