February 6, 2014 by ConcertKatie No Comments 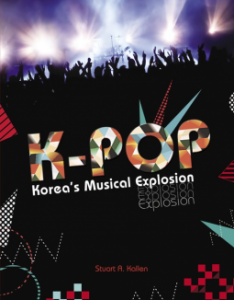 One of my friends is dead set on getting me into KPop because one of her coworkers is into it and got her into it so I guess she wants to share the wealth.  She’s shared a few videos with me but I just can’t get into it.  But I figured I’d check out this book to impress her and maybe find a band she doesn’t already know about that I enjoy.

It credits KPop becoming big when Psy exploded on the scene with Gangnam Style.  While the song is catchy – and I got to see it live which was certainly interesting… I’ve kind of written him off as nothing more than a one hit wonder.

Obviously the roots of KPop go back much further than 2012 – much like American Pop music.

Each chapter ends with a playlist – I have taken note – and will have to check out some of these songs when I get the chance.   And yes – it mentions BigBang which is the band that my friend is trying oh-so-hard to get me into.

Certainly an interesting read and gave me some more insight to the genre and how it started and who some of the more noteworthy artists in the genre are.

Featuring quirky horse-riding dance moves and an infectious electronic beat, an unlikely music video and its leading man made history in 2012. In December of that year, “Gangnam Style” reached one billion hits on YouTube—the most views ever. Seemingly overnight, the South Korean pop star behind the hit—Psy (Park Jae-sang)—became a household name.

But Psy is just part of the story. Other South Korean pop sensations such as Girls’ Generation, 2NE1, and BigBang are part of a global sensation called Hallyu, or the Korean Wave. South Korean bands are performing to sold out arenas all over the world, and fans can’t get enough of South Korean music, films, television, food, and manhwa (cartoons).

K-Pop: Korea’s Musical Explosion traces the journey of South Korean pop music, from the early influences of American rock ‘n’ roll in the 1950s to the success of a tiger-eyed sensation called Rain, who wowed American audiences in the early 2000s. Discover how this Korean Justin Timberlake, and those who came after him, rose through South Korea’s star-making system through grueling hard work to seduce international audiences with their tight choreographies, irresistible beats, outrageous outfits, and exciting stage shows. You’ll become part of the K-Pop fandom world too!