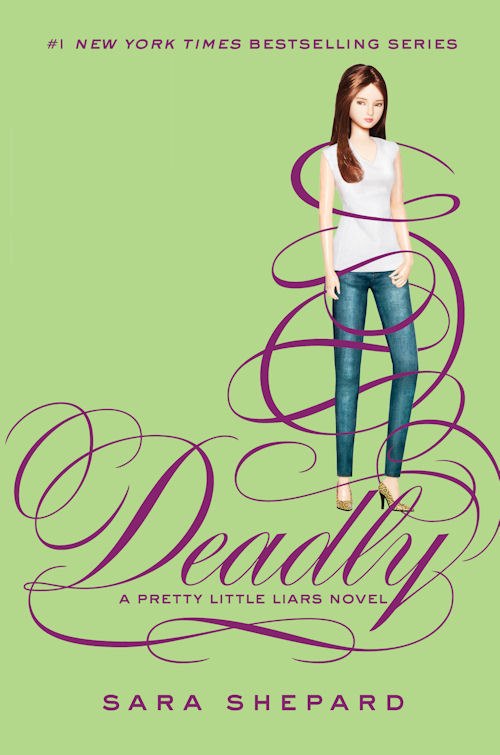 Deadly is the 14th book in the Pretty Little Lairs series.  I always want to try and not read these books while the TV show is back on the air, but unfortunately my schedule didn’t work out that way and Pretty Little Liars was already back for the winter when I started this book.  The two worlds are so different on the show versus the book I try to keep them separate so I am not totally confused.

In this book, it’s pretty much more of the same – Aria, Hanna, Spencer and Emily are trying to figure out who is helping A.  At first they thought it was Noel, Aria’s boyfriend, but some stuff ends up happening that they realize it is not him.  They have some clues and are trying to figure out who it may be – but then everything they have been framed of comes up and back to haunt them.

Remember Tabitha in Jamaica? Well, now the girls are being taken in for questioning on her murder and a very believable video of the 4 girls with Tabitha is released.  The girls know that it can not be them, they didn’t do it, but no one else believes them.   It was kind of funny to be reading the book and the girls freaking out that they may have to go back to Jamaica for their trial and jail time if they are convicted – while sitting at the pool in Jamaica.

I don’t want to give away too much of what happens in the end – but I have to say I do kind of wish that this series would wrap it up (again!)… I feel like as long as the TV show is going on the book series will continue and although I do enjoy both it’s kind of just the same old, same old every few books.

High school seniors Aria, Emily, Hanna, and Spencer have all done horrible things—things that would put them behind bars if anyone ever found out. And their stalker “A” knows everything.

So far A has kept their secrets, using them to torture the girls. But now A’s changed the game. Suddenly the girls are hauled in for questioning, and all their worlds begin to unravel. If A’s plan succeeds, Rosewood’s pretty little liars will be locked away for good. . . .