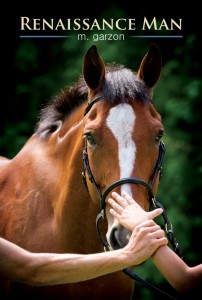 Renaissance Man is Book 3 in the Blaze of Glory series. (I have previously reviewed Blaze of Glory and Look Twice) .  If you have not read any of the books in this series yet and do not want to be spoiled, then I recommend you do not start reading this review.  Seriously, don’t read beyond this point because I will be mentioning things that happened in the previous books and if you want to read them you will be spoiled. (I was spoiled on the first book when I was setting up the review post so I know how terrible it is to be spoiled on this series.) Leave the post now…

In Book 3, Tea’s twin brother Seth is off in Europe looking for their biological father and traveling.  Jaden isn’t around as much because he is working to become a lawyer and has to put in a lot of extra hours at the office.  Tea is off competing with Hades almost every weekend and it seems to be putting a bit of stress on her and Jaden’s relationship because they hardly ever get to see each other.  Jaden is trying to get Tea to pursue her schooling to become a vet more seriously because she can’t ride horses for the rest of her life.  Tea doesn’t see why she can’t!  Tea then begins to realize that Jaden isn’t happy with his career in becoming a lawyer, that he was always happier when he was playing polo.  Their relationship seems to be on the rocks and when an opportunity arises for Jaden to leave to help his uncle with his horses, Tea tells him to jump at the chance hoping it would get him back into polo and happier again.

There is all sorts of other drama going on with Hades getting stolen and how to deal with that. Also, Jaden’s father wants the family to sell the farm so he can have extra money to get married again and have children with his new wife.  Dec doesn’t really want to sell it because he wanted Tea and Seth to live there until they finished school. Gran doesn’t really want anything to be sold either but ultimately it is up to Dec and his brother and sister what they want to do.  Tea doesn’t want to lose the farm and barn and wants to figure out a plan to make things work.

It was interesting to see the changes in the characters over the three books (mostly for the better) and how everyone is still trying to deal with Jaden and Tea’s relationship. Also how Tea’s relationship with Seth differs with him not around most of the book.  Another great book from m. garzon and I am still looking forward to what happens with this as a TV series!  This is the last book of the trilogy.  These books are recommended for ages 15+.

The author sent me a free e-copy of this book in order to write this review. I was not otherwise compensated.

The third book in the popular ‘Blaze of Glory’ series, soon to be adapted for television.

“And they lived happily ever after.”

In fairy tales, that’s always how things end. The prince and
princess ride away on his white horse, and from then on all’s right with
the world. But what if it wasn’t? What if the prince’s life didn’t suit
the princess? What if she felt stifled by life inside the castle walls?
Could she tell him? And if she loved him—really loved him—how could she
ask him to give up his kingdom?