December 30, 2013 by ConcertKatie No Comments 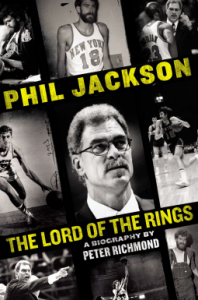 Phil Jackson is a pretty well known guy in basketball and I know this because I know of him and I don’t know many names in basketball.  This is a biography of him, though it is unauthorized and he was not a part of the project as he has released several of his own books.  He had no problem with his friends talking to the author though and did not try to interfere even though he was working on his own book.

Probably best known for his time with the Chicago Bulls (at least to me) this book tells a lot more about the man and what led to him becoming such a successful coach – and ‘the lord of the rings’ as the book calls him.

The book is well written and flows.  It is a bit on the longer side – but how can you fit so much greatness in anything less? It only has about 10 pages of notes – which is fascinating because usually these biographies that are super long have much more than that listed and then I get excited because it ends much earlier than I thought it would 😉   The post scripts include some anecdotes and talk from some of his friends more candid than in the biography.  They all seem to be inspired by him and speak very highly of him.

Phil Jackson the legendary coach of the Los Angeles Lakers and Chicago Bulls has told his own story. Now it is time for a different view a deeply reported, unauthorized account by one of America’s top sports journalists.