Book Review: Take Me Out

December 6, 2013 by ConcertKatie No Comments 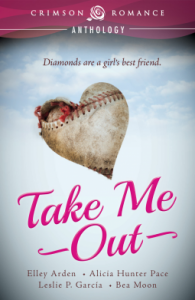 Take Me Out is a book made up of 4 stories all related to romance and baseball. Of course, right up my ally.

The first story – Trade Off – is about a catcher named Ben who is thinking of retiring. After being traded to Orlando he is told that everything happens for a reason. He was bummed about it, until he ended up meeting up with his high school sweetheart in an elevator in Orlando.  They had broke up so they each could pursue their dreams but both are still into each other. Can they make it work this time?

The second story is Slugger Gone South which is about Bailey and her ex-fiance Yankees player Marc “Polo” McNeal.  They meet again at a charity event where Bailey is working as a nurse.  They had been engaged but when a story came up that Polo may be the father of another woman’s baby she doesn’t want to hear what he has to say and mails the ring back. Years later both confess they haven’t stopped thinking about each other and Polo convinces Bailey he was always faithful to her and they had the paternity test knowing he wouldn’t be the father so he wouldn’t have to pay off the woman to stay quiet. Can they make it work this time?

The third is Safe at Home (Im not sure why they are in a different order in the write up, but this was definitely the 3rd one!) is about Amanda Warner – she is the child of a ball player and tries to get Josh “HotStuff” Arrevalos’ attention.  Her father used to run the family shop but after a stroke he can no longer and business is slipping.  She wants to try and get Josh to come in to try and boost their sales. Josh wants to date her to get publicity instead but Mandy doesn’t want to date a ball player.  He tries to prove himself to her all while trying to get her sister (who had run off with a ballplayer) to come home after 8 years of being away. Will she end up dating him and break her own rule?

The final story is That Ol’ Team Spirit which is about a granddaughter and grandmother who work in the concession stand at a ballpark.  When each shift there is sugar and all sorts of stuff thrown on the floor they are determined to get to the bottom of it. Grandmother Peg things that it is a ghost and they have a seance along with one of the sports reporters, Rob (who coincidentally used to date granddaughter Trish) and it is Lefty, one of the ballplayers who supposedly committed suicide 50 years previously and had been involved with Peg. They try to figure out what it is Lefty is trying to tell him and get him to leave and cross over, meanwhile, Peg is trying to get Trish and Rob back together…

These were 4 nice short stories, the whole book is just over 100 pages so it was a nice easy read for an evening and combining 2 of my favorite things – baseball and romance books. Definitely recommended for the baseball fan who also enjoys romance novels.

The crack of the bat, the roar of the crowd… Four rising star authors celebrate the love of the game with these sweet and seductive baseball romances.

Trade Off by Elley Arden: Traded and jaded, catcher Ben Border is considering stepping out from behind the plate. Then he runs into former flame Scarlett Dare. Turns out the sexy marketing executive still sends him into a fever pitch. But is she willing to trade Fortune 500 success for a happily ever after?

Slugger Gone South by Alicia Hunter Pace: When New York Yankee Marc MacNeal comes to Merritt, Alabama, for a charity golf tournament, he’s shocked to be reunited with his ex-fiancee Bailey Watkins. It could be the perfect chance to get some long-awaited closure—or the start of a whole new ball game…

That Ol’ Team Spirit by Bea Moon: Someone’s haunting the Sharks’ stadium and creating some major league mischief. So psychic Peg Noonan and her granddaughter Trish are determined to discover who’s menacing their concessions stand. With the help of Trish’s high school love, sportswriter Rob Hanks, they just might have a ghost of a (second) chance.

Safe at Home by Leslie P. García: Amanda Warner hates baseball, but knows it’ll take a swing for the fences to save her dad’s hardware store. Hoping his star power will bring the crowds in, she sets her sights on Scorpions’ All-Star Josh “Hotstuff” Arrevalos. But is her heart ready to play ball again?