Giveaway: Jammy Jams Once Upon a Rhyme Download Card 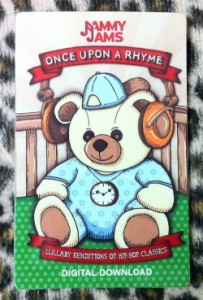 Great for gifts! Card includes an exclusive download code to redeem all tracks and artwork from album. Card is printed on high quality plastic, same as most retail gift cards.

On “Once Upon A Rhyme: Lullaby Renditions Of Hip-Hop Classics”, Jammy Jams explores the melodies of old school hip-hop songs and brings them to life with calming renditions for parents to enjoy along with their babies. The parent can take a stroll down memory lane while creating brand new memories for baby. This album soothes the inner and outer soul. You will be amazed as you listen to soothing lullabies featuring the melodies of acclaimed old school hip-hop songs such as Run-D.M.C.’s “Rock Box” and Coolio’s “Gangstas’s Paradise”. The soothing sounds are what Jammy Jams is all about. Experience these popular tunes in a whole new way with baby today.

When I first heard about this CD I wasn’t sure what to expect. How on earth could hip-hop songs turn into songs suitable for babies? But once I started listening I was pleasantly surprised and I must say that this CD is awesome! You will know what the songs are when they start, but you will definitely not recognize them as you think you might if you know the originals. The cd is very calming and soothing which is not something I ever though I’d be saying about Eminem or Jay Z songs! Best of all, Jammy Jams is offering up a download card to one of my readers – just enter the contest below!


Contest ends on September 2nd. Winner will have 48 hours to respond to the winning email I will send them to claim their prize. If a prize is not claimed within the 48 hour period an alternate winner will be chosen so that the information can get to the promoter in a timely manner!