February 25, 2013 by ConcertKatie No Comments 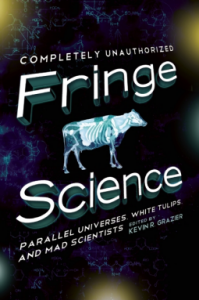 I loved the show Fringe, I tried to make sure that I watched it every week and was bummed that it recently came to an end.  However, I was able to have it live on a little bit longer when I read Fringe Science.  The book is a series of essays from various professionals diving a little bit deeper into the world of Fringe.  There’s so many cool things from the show that are explained and talked about in more detail and it is all just really, really interesting.

One of the chapters compares Fringe to the X-Files another FOX sci-fi drama – Fringe premiered almost to the exact same day that the X-Files did, just 15 years later. It talks about the similarities with the FBI and also the “no-nonsense female lead”, you have to love those!  It also talks a bit about how the X-Files dealt with ghosts, mediums, werewolves and stuff similar to that – and Fringe has not dealt with any of those.  So while the two shows may be somewhat the same, they are also very different in their subject matter.

There is also a breakdown on what type of paranormal activities go on in the show – these are made obvious by the words that float by during the show – Psychokinesis, Teleportation, Nanotechnology, Artificial Intelligence, Cybernetics, ESP, Genetic Engineering – just to name a few.

One chapter tries to find the ancestors of the characters of Fringe in other literature and works.  J.J. Abrams admits to revisiting the Frankenstein idea but with trying to tell it legitimately.  Other comparisons are to Poe, and many others.  If you are into this genre – you’ve probably already checked out everything mentioned, but on the off chance you haven’t, it mentions some great other works to check out that are in the same realm as Fringe.

The chapter I found most interesting was the parallel universes one – simply because it began by asking if there was another version of myself reading this same article deciding whether or not to continue on reading it?  Could that really be possible?  It is fascinating stuff and really makes you think.

If you loved the show Fringe or just love interesting science-y stuff – then definitely check out this book, it has a lot of interesting and thought provoking stuff in it, all of which somehow relates back to the show Fringe. I wish it was still going to be on!

Fringe has always been more than the sum of its parts—but its parts, too, are worth a closer look. The show combines a surfeit of mad science, some old-school sci-fi flair, and a dash of strawberry-milkshake whimsy to create the challenging, fascinating Pattern that keeps us coming back season after season and universe after universe.

Now, in Fringe Science, cutting-edge scientists, science writers, and science fiction authors and historians provide a smart, savvy, and accessible look at the world(s) of Fringe.

– MIT physics professor Max Tegmark illuminates the real-life possibilities of parallel universes
– Stephen Cass, founding editor of Discover‘s Science Not Fiction blog and a Senior Editor with Technology Review, unravels Fringe‘s use of time travel
– Award-winning science fiction historian Amy H. Sturgiswalks us through the show’s literary and television ancestors, from the 1800s on
– Television Without Pity staff writer Jacob Clifton looks at the role of the scientist, and scientific redemption, through the ever-shifting role of Massive Dynamic
– Garth Sundem, bestselling author of Brain Candy, explores the mysterious way that memory works, from why Walter forgets to how Olivia remembers
– And more, from lab cow Gene’s scientific resume to why the Observers should be wearing white lab coats