Book Review: The One 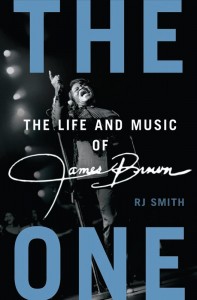 The One is a biography about the Godfather of Soul – Mr James Brown.  James Brown was born dead and his Aunt Minnie refused to give up on him.

James was quite the business man. When the label wouldnt release his Live at the Apollo album because they didn’t think it was any good,  he took matters into his own hands and sent copies around.  Demand for the album became so big that the label had to release it! He was also abusive. There were stories of him beating a girlfriend and getting violent with others as well.

While I do know a lot of James Brown’s songs, I didn’t know much about him so this book definitely opened my eyes a bit about him and his music as well as his personal life.

The book also focuses on social issues – most notibly the Civil Rights movement and James’ involvement with this.  I have to say this was probably the most interesting aspect of the book because it is not what you typically see in a biopgraphy about a musician.

I certainly recommend this book for anyone looking to find out more about James Brown and all of the aspects of his live – activist, musician and business man.

The definitive biography of James Brown, the Godfather of Soul, with fascinating findings on his life as a Civil Rights activist, an entrepreneur, and the most innovative musician of our time.

Playing 350 shows a year at his peak, with more than forty Billboard hits, James Brown was a dazzling showman who transformed American music. His life offstage was just as vibrant, but until now no biographer has delivered a complete profile. The One draws on interviews with more than 100 people who knew Brown personally or played with him professionally. Using these sources, award-winning writer RJ Smith draws a portrait of a man whose twisted and amazing life helps us to understand the music he made.

The One delves deeply into the story of a man who was raised in abject poverty in the segregated South but grew up to earn (and lose) several fortunes. Covering everything from Brown’s unconventional childhood (his aunt ran a bordello), to his role in the Black Power movement, which used “Say It Loud (I’m Black and Proud)” as its anthem, to his high-profile friendships, to his complicated family life, Smith’s meticulous research and sparkling prose blend biography with a cultural history of a pivotal era. At the heart of The One is Brown’s musical genius, as Smith traces the legend’s reinvention of funk, soul, R&B, and pop, and his evolution as an artist whose crucial influence spans at least 5 decades.