January 6, 2012 by ConcertKatie No Comments 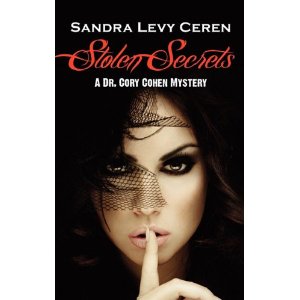 Stolen Secrets is a Dr. Cory Cohen Mystery by Sandra Levy Ceren.  The book centers around Dr. Cory Cohen, a psychiatrist.  It starts out when one of Cory’s patients, Morgan, gets a creepy phone call that mentions one of her fantasies that she has only told to Cory.  Obviously due to confidentiality reasons, Cory has told no one so she is desperate to find out how someone knew this.  She ends up accidentally stumbling upon a microphone under her couch and tries to figure out which one of her other patients might have planted it.

We meet a few of her other patients – the hunky Alan who seems to have trouble with women.  Carlos and Jolene who are having marital problems and see Cory both separate and together.  Kevin who seems to have an obsession with being better than his “older” (twin) sister.

After Morgan tells Cory about the mysterious phone call, she seems to vanish.  A few days later Cory gets a letter that she is with her sick father in Greece, but Cory is suspicious.  She ends up hiring a private detective to try and figure out who might have planted the microphone, but asks him to train her because she doesn’t want to divulge information about her clients due to confidentiality issues.

There are a few twists and turns in the story and some of them I did figure out and others I couldn’t quite put my finger on (but was heading in the right direction).  The book is well written and a quick read.  It is just over 200 pages and has 50 chapters – but don’t let that overwhelm you as some are only a page or two and the suspense will want you to keep reading!

This book is the 2nd in the Dr. Cory Cohen Mysteries series.  I think that I am going to need to go back and read that one too – and any others that might be released because I am now hooked on this character!

A woman reveals her most intimate fantasy… a stolen secret which could lead to murder!

A strait-laced patient in San Diego running for District Attorney is threatened by a midnight phone caller who knows her dirty secret – her fantasy of living as a prostitute – a secret she shared only with Dr. Cory Cohen. After confronting her therapist, she vanishes.

As Cory wrestles with her patient’s disappearance, the security breach and the potential harmful effects on other patients, events escalate. A patient is blackmailed. Cory is stalked, and her quarters burgled, forcing her to escape an unseen enemy and sender her on a spiraling trail of deceit, betrayal, blackmail and murder.

I received a free copy of this book from Modern History Press.  I was not required to write a review, but I chose to anyway.  I was not compensated for this review.