January 29, 2012 by ConcertKatie No Comments 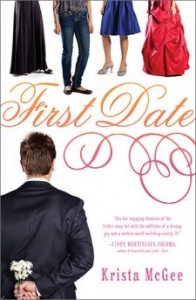 First Date by Krista McGee was a bit cheesy, but fun to read.  It is based around Addy Davidson, a high schooler chosen to participate on a reality TV Show “Book of Love” to win a date with the President’s Son, Jonathon Jackson.  She doesn’t want anything to do with the competition so she decides to be honest and tell Jonathon up front that she hopes to be one of the first ones to go home.  Of course this backfires and the viewers end up loving her, which doesn’t make the producer very happy, since he is apparently accepting bribes from other contestant’s parents to help them hang around in the competition longer.

Each competition, the producer tries to work against Addy so that she will go home, but Jonathon, who is ultimately picking the winner (or is he?) takes a liking to Addy.  And Addy ends up taking a liking to Jonathon even though she didn’t expect to.

There are also some subplots going on – Addy’s parents were missionaries and killed when Addy was young.  She has been living with her Uncle Mike ever since.  Uncle Mike ends up being one of the security guards for the TV show but no one can know they are related.  He brings Addy some of her mom’s journals which help Addy stay sane during all the craziness of the reality show.

Addy and Mike also overhear an assassination plot on the President and Jonathon and work with the Secret Service to catch the guys and put them in jail.

This is a Christian fiction so there is a lot of bible verses and christian talk mixed in with the story.  It is a quick young adult read and I read it in about 2 hours.  Like I said, it was pretty cheesy, but cute too.

Addy Davidson is the last girl in the country who wants to be on the new reality TV show to win a date to prom with the President’s son. She’s focused on her schoolwork so she can get a scholarship to an Ivy League college, uncomfortable in the spotlight, never been on a date, and didn’t even audition for it.

But she got selected anyway.

So she does her best to get eliminated on the very first show… right before she realizes that the President’s son is possibly the most attractive guy she has ever seen in person, surprisingly nice, and seemingly unimpressed by the 99 other girls who are throwing themselves at him.

Addy’s totally out of her comfort zone—but that may be right where God can show her the most about who she is . . . and who she was meant to be.