Javier Colon at the Ridgefield Playhouse

If you have been watching NBC’s “The Voice”, you are probably familiar with vocal talent Javier Colon.  If you’re not, well you’re missing out on a great show with some great talent.

Thursday night Javier did a home town show in Ridgefield, CT (He is from Stratford), the only show he has done since being on The Voice and the only show he will do before heading out for the live shows. (Be sure to vote for him)

His opening act was Rebecca Correia, who is a friend of Javier’s since college. She performed 7 songs and has an absolutely amazing voice!  Be sure to check her out on iTunes if you aren’t familiar with her stuff – I’m sure you will enjoy it!

After a brief intermission, Javier took the stage.  I wasn’t exactly sure what to expect because I had never had the chance to see Javier before, but he did not disappoint.  He has an amazing voice and his original songs were phenomenal as well.  His performance went on for nearly two hours – with him chatting about songs and his family in between performing.

He mixed in cover songs with originals and all of them were sang beautifully,  he certainly is “The Voice” and if he doesn’t win it will be incredibly disappointing.  Someone yelled out from the crowd that he has to win and he responded “I’m gonna try!” and encouraged us all to vote for him once the live rounds air beginning June 7th! (Right around the corner!)

He talked a bit about how he was never really in to country before, but is now – and played part of Achy Breaky Heart and Friends in Low Places to demonstrate a few songs about why he didn’t like country.  Then he played “Love Me” and he said that song had turned him on to country and he liked how the songs told a story.  I am not a big country fan myself either – but I do also enjoy the storytelling aspect.

He also mentioned that his song “Ok, Here’s The Truth”, was written in a country fashion in that it tells a story and that you really need to listen to the lyrics to figure out what is going on in the song.  Of course, he told me to listen so I listened and was near tears by the end of the song!  I think there are a couple of versions of the song on YouTube and I recommend you check it out for yourself and pay attention to the lyrics – I don’t want to give anything away!

Since there was a piano on stage, he played a couple of songs on it – specifically Song For Your Tears and then a song by one of his favorite female singers.  At first he went in to singing “Oops I Did It Again”, but said that he was joking and then did a great cover of Sarah McLachlan’s Arms Of An Angel.

Honestly, I don’t think how amazing his voice is really comes out over TV, it is something that is best experienced live.

After the show he hung out at the merch table and signed autographs and took photos with anyone who asked!  Many in the crowd were family and friends so it was nice to see him interact with them.  It was also funny when he’d be talking to someone but spot someone else in the crowd who he knew, and would get all excited that he’d be chatting with them next! 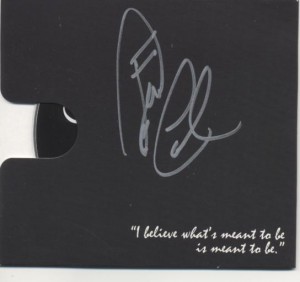 Rebecca and Javier’s setlist under the cut.  Rebecca mentioned all her song titles before songs but Javier did not – so I might have names wrong and I know I am missing a couple from his set.

Shower the People (James Taylor)
?
When
Nina
Meant To Be
Use Me (Bill Withers)
Achy Breaky Heart (Billy Ray)
Friends In Low Places (Garth)
Love Me (Collin Raye)
Lovin You
Song For Your Tears
Oops I Did It Again (Britney)
Arms Of An Angel (Sarah McLachlan)
The Wishing Well (w/ Rebecca)
Ok, Here’s The Truth
Come Through
Crazy
No One (Alicia Keys)