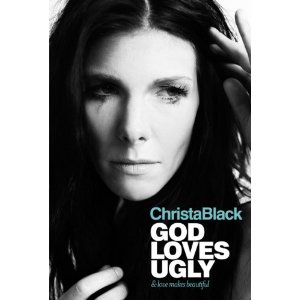 I was first introduced to Christa Black when she was on tour with the Jonas Brothers as their fiddle player during their 2009 World Tour.  I began following on twitter where she posted that she had a blog.  She frequently updated her blog with the struggles that she had faced and her advice on how to overcome them.  Jonas fans urged her to write a book and in November 2010 she released “God Loves Ugly” along with it she also released a CD of the same title and the songs correlate with the different chapters in the book.

I really like Christa’s writing style. It’s as if she is talking to you (and only you) and telling her life story and struggles.  At the end of each chapter is an exercise called “Your Turn” to help readers feel positively about themselves.

I think this book is a great read for any young girl, whether they have had struggles with weight, eating disorders, self esteem or not. (Although I think it would be difficult to find someone who did not relate with at least one of the chapters!)