Although I did not spend too long at the Big Apple Comic Con over the weekend, I decided to spread out my posts – mainly so that all my complaining would be in one post and all the good that happened be in another 😉  I’ll start with the negative so this story will have a happy ending.

I had never been to a Comic Con like this before so I wasn’t entirely sure what to expect, but I have to say that I expected there would be some level of organization.  We arrived just about 10am when doors were set to open.  There was a lot of confusion and there was only 1 person from the Con staff looking to get VIP people out of the main line and in to the VIP line so that they could be let in “first”.

I waited in the VIP line for about 30 minutes and got my wristband for entry, but was told that I should come back later to pick up my VIP stuff when the line was not as hectic.  Except that my VIP “stuff” included my voucher for a Tom Felton photo and autograph and Tom Felton was over to the left signing as soon as we got inside.  So my options were to either pay another $25 on top of the $100 I dropped on VIP to get an autograph, or wait in the mess of the line to get my vouchers.

And when I say “mess of the line”, that is an understatement.  The general ticket sales were all lumped in with the VIP ticket redemption and people kept getting shoved inside the door so rather than be an orderly line it was just a massive crowd which of course made things more difficult and then people were cutting in saying the were buying tickets but then traded in their VIP tickets instead. Not cool!

After about an hour I finally got my ticket scanned.  The hold up was that the vouchers were being individually added to our lanyards.  Now, if everyone who bought VIP gets a VIP lanyard and a photo-op and autograph voucher, wouldn’t it have maybe made sense to have someone add these items to the lanyards the night before? Or at the very least have another staff member there to help speed up the process?

The second showing of just how confusing everything was, was when it was time for the Photo-Op.  A lot of the Tom Felton VIPs were hanging around, but James Marsters photo-ops would be going on first (why they had them back-to-back when they were the most popular people at the place, I’m not sure) and no one knew where they were supposed to go, or where the people who wanted to buy a photo-op were supposed to go either.  When staff was asked – they told the person who asked to be in charge of forming the line. 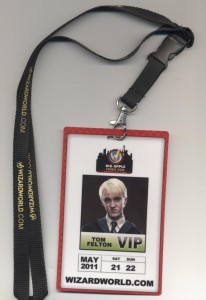 Meanwhile, also in the photo-op area were a bunch of artists who were obviously there to try and make a buck.  Lines for the photo-ops were completely blocking their tables, though fortunately most people moved out of the way if they were told by someone that they wanted to go by to see the artists.

However, having hundreds and hundreds of people in such a small area meant for a VERY hot room.  Lots of body heat and I honestly don’t know if they even had the AC on in the place. It was awful.

When I finally had the chance to check out the booths upstairs – there was barely any room to walk by if someone was at the table on either side of the aisle.  I saw a couple of guys in wheelchairs and I honestly don’t know how they were able to make it around at all and I felt really bad for them.  (And staff was few and far between to ask for assistance)  Then when we decided to leave upstairs – the down escalator was off!

I didn’t even bother staying for Tom Felton’s panel because I just didn’t think I’d be able to stand in another line (my legs were in a lot of pain from all the standing) and could not deal with any more confusion.

Stay tuned for Part 2 when I left you know how my autograph and photo-op sessions went!