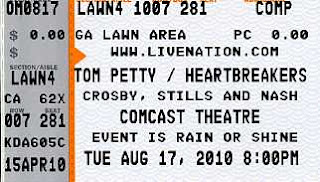 Last night was my dad’s pick of shows for my Ultimate Access Pass, Tom Petty & The Heartbreakers with Crosby, Stills & Nash opening.  We got to the venue a little before doors, and waited to be let in.  Gates opened at 6:30 and we went in to go to the lawn – but couldn’t be let into the area because it sounded like CSN were soundchecking. I thought that kind of thing needed to be done before doors!  The security told us they would let us in at 7, but it wasn’t until a little after 7 that they actually let us head to the lawn.

We picked our spot and waited for 8pm to roll around, when the concert would start. Crosby, Stills & Nash came out and did an amazing performance.  Their harmonies were perfect and they definitely still got it even if they are “old”.  I was incredibly impressed by their performance (I love harmonies. Especially 3 part – I am a Hanson fan after all) which was about an hour – 10 songs.  They said goodbye and then came back to do an encore of “For What It’s Worth” which was interesting.  I had never seen an opener do an encore before, but I guess it was a bit more of a co-headlining gig anyway.

After their set, a fight broke out behind us on the lawn, and the only security in our section was a small female who called for backup – but by the time backup arrived the fight had been resolved.  There was an hour break between Crosby Stills and Nash and Tom Petty coming out on stage – which I thought was a bit ridiculous.  They were also checking on the equipment, which once again, I always thought was done long before doors opened.  I don’t know if there was a problem discovered with the equipment that made for the delay or if there is always that much of a delay for this tour.

About a half an hour into this wait, there was another fight in front of the handicapped section.  I saw the scuffle going on and next thing I knew, a kid was flying through the air.  Of course the kid that punched him ran and security was trying to make sure that the kid was ok (he was taken away on a stretcher and I hope he will be ok) and not listening to the people in our section who had seen the kid and had a description of him.  Instead, security came back to get statements when Tom was on stage.  I have a feeling if there was only 30 minutes to wait instead of the hour – that fight probably wouldn’t have ended up happening.

Tom Petty and the Heartbreakers took the stage about 10pm.  I didn’t realize how many hits they had and how many of them I actually knew!  I really liked their stage set up – the top of the stage had several screens which had different video feeds on them.  Sometimes there were 2 or 3 different band members being shown and they were a lot better quality than the screens we had out on the lawn.  It was nice to get to see some different views!  They are touring to promote their new album – MOJO – which we were able to text and get for free (although it is going to take up to 48 hours to get emailed to us and I haven’t gotten it yet – I’m sure there were a lot of requests they are fielding!)  They did 3 or 4 of the new songs mixed in with all their singles.

Their set ended at about 11:30, but they did a 10 or so minute encore of Running Down The Dream and American Girl.  While we were starting to pack up, one of the guys we were with was pointing out something.  At first we thought it was just smoke from the food stand nearby, but taking a step to the right we noticed it was a HUGE fire.  We weren’t sure exactly where it was, but we thought it might be in the parking lot.  We hung around “inside” for a bit longer, figuring if firetrucks and everything were on their way we’d end up stuck in the parkinglot anyway.

By the time we got out to to the parking lot they seemed to have the fire under control but there was a lot of smoke and the air smelled really bad.  I’m not sure what was on fire (a car?) and I can’t find any news reports about it either, though we’ve been looking for them since we were in the car on the way home!  (Funny, a google search of “comcast theatre fire” brought up my Kings of Leon review because of their song ‘Sex is on fire’)

Aside from the craziness that went on -it was a great show and definitely recommended!