A couple of photos taken by Lauren of Burnham’s performance yesterday.

A LOT happened yesterday. I was awake from 7am-3am, just to give you an idea!  Which means there are a lot of posts to come, but I am trying to get everything organized and in order so it might take a few days. 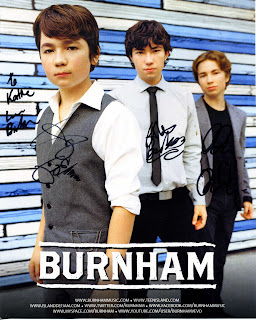 The first thing we did yesterday was went to the Jonas Brothers Road Dogs game.  Before the game, at 9:30am there was a pre-show concert (the game wasn’t supposed to start until noon) with Burnham.  Burnham is made up of 3 brothers, Alex, Andre and Forrest and are obviously often compared to the Jonas Brothers and Hanson.  I see more similarities to the Jonas Brothers than Hanson, to be honest, but any band of 3 brothers is automatically going to be tagged “the new Hanson.”  Alex and Andre played guitar while Forrest sang lead and they had a backup drummer.  (Similar to Nick and Kevin playing guitar while Joe is usually the front-man)

The crowd seemed to be made up of mainly small children, which I thought was interesting because the guys are 18, newly 17 and 14. (Andre’s 17th birthday was actually yesterday!) Although, I guess most of the teens decided that Jonas was more important and were in line to get seats for the softball game.

Burnham did a 5 song set  – I believe the songs were Rich Girl, Don’t be Shy, Untouchable, Glow in the Dark and Catch Me If You Can (the last song being their single that has been available on iTunes for about a month)

The songs were catchy and I enjoyed listening to the set.  Afterwards there was a make-shift meet and greet to the side of the stage that was pretty much just a mob of girls around the guys!  Lauren had a gift from fans of Burnham for Andre, so we made our way up to them and she handed it to him. I don’t know what words were exchanged, but she must have told him the gift was heavy because he grabbed it and then pretended to go flying into the wall of the building because it weighed him down so much!  We opted to not get photos with them and went inside for the game – doors had opened as it was now after 10am!

This performance by Burnham was a milestone – it was my 100th concert in my home state of Connecticut!