August 2, 2010 by ConcertKatie No Comments

I went to the Rascal Flatts show with my friend Christine.  She lives relatively close to the Comcast Theatre, but it took us forever to get there because apparently the entire state of Connecticut was trying to get to this show.  (Or maybe just all the awful drivers of Connecticut)  While we were waiting we tried to win John Mayer Acoustic Cafe tickets from TIC, but I couldn’t get through at all and Christine was caller #4 when they wanted #9! Bummer… but at least it helped pass the time.

We got in and decided to hear straight to the lawn.  The handicapped section was all set up with chairs and there didn’t appear to be any security.  We went in and grabbed our spot for the evening, which actually had us blocked off on 3 sides by rails by where it was situated.

There appeared to be a lot of people in there that were able-bodied and just thought they could take a seat.  With no security, no one told them to leave.  For the most part, during the openers the people in there were well behaved, so it wasn’t a huge deal.  I was able to actually see Chris Young and Kellie Pickler on stage without standing which was rare.

Chris Young performed first, playing 6 songs.  As mentioned before I am really not up on country so I knew nothing about him.  His performance was good, but I found it amusing that he felt the need to tell us his name after nearly every song – when the screen behind him said “CHRIS YOUNG” in huge red letters.  Maybe he thought a lot of people couldn’t read? I’m not sure.

Kellie Pickler was up next, who I was beyond excited to see.  I hadn’t seen her since the Idol tour and I think she is hilarious. (We tried to get M&Gs with her through her website but unfortunately we were not chosen) A LOT of people knew her songs which surprised me.  I however was not one of them LOL  Her song “Rocks Instead of Rice” cracked me up.  She started off by asking the crowd if anyone had been to a wedding or known a couple who got married.  Pretty much everyone did.  Then she said, “did you ever think.. bless their hearts but this just ain’t gonna last?” and went into the song after dedicating it to her ex and the bimbo he is with now.  The lyrics were hilarious and you should definitely check that song out!

Comcast Theatre was also offering “Grasshopper” tickets which were $10 tickets to go from the lawn to the pavilion since the lawn had sold out but the pavilion did not.  We opted to not do this, but we probably should have.

When Rascal Flatts took the stage, all hell broke loose. Kids were jumping into our section and it was pretty ridiculous.  There was a woman on the level in front of me in a wheelchair and a kid was trying to jump over the rail and was like on her lap trying to push her out of the way to try and get over the rail.  You can blame him being drunk but I am pretty sure he’d be pretty stupid even sober. Luckily one of his friends came and pulled him away and I don’t think the woman in the wheelchair ended up harmed but that REALLY bothered me and would not have happened if there was security monitoring the section (as there has been at the other shows I went to)

Despite the drunk and stupid kids all around, I did enjoy Rascal Flatts set.  Their stage set up was really cool with a lot of moving screens and special effects. I didn’t get many photos of the actual stage because it was hard to see over everyone grinding in front of me (apparently some of the songs bring people back to the 8th grade)  They did around 23 songs and they were all very high energy.

They had mentioned that they get a lot of hate because people come to hear them play just a couple of songs and they don’t always have time to play everything that people come to hear – but they did a LOT of talking! They could easily fit in another couple of songs if they took the time to shut up a bit 😉  But it was nice that they talked and thanked the fans for coming out and everything like that.  They were just really wordy about it!

Before they came out for the encore they had an animation up on the screen that was pretty cool.  It was a nice way to kill time but keep the fans entertained and not left in the dark chanting.  Another nice touch was that they had lights on the waaay back of the lawn, probably to help them get a good view of just how PACKED it was back there!  And as always, they did my favorite, including the openers in the encore! Chris and Kellie came out to sing Summer Nights as the last song of the night.

Photos under the cut!

The lights in the back

The lawn was PACKED

A little glimpse of the stage setup

Everyone, Chris and Kellie included, were behind those screens. 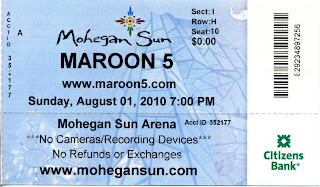 Here are the setlists from last night’s Maroon 5 show.

Guster: (This is from the setlist that was on the stage so song titles might be shortened, but I am assuming if you are looking for this you will know what they are?)
Captain
Manifest
Demons
R.O.C
This could all be yours
Hang On
Architects
Barrel
Airport
Satelitte
Amsterdam
Downstairs
(Big thanks to the ladies who were sitting next to us who went to get a set list and then let me copy it!)


There were a few songs I wasn’t sure of in Maroon 5’s set.  I did some googling and I think I’ve got it, but song titles might not be accurate on the new songs
Misery
If I Never See Your Face Again
Harder To Breathe
Give A Little More
The Sun / Lets Get It On (teaser)
Won’t Go Home Without You
If I Ain’t Got You (Alicia Keys cover)
Secret / Whats Love Got To Do With It
She Will Be Loved
Wake Up Call
Shiver
Don’t Know Nothing About That
Stutter
This Love