The Mets re-did the floor in the ladies room

Andy was excited to be at Citi Field

and pictures from VIP

And I was on TV

This Time Around night

We met HS at Hot Topic

Were front row for soundcheck

Had a nice spot for the show! 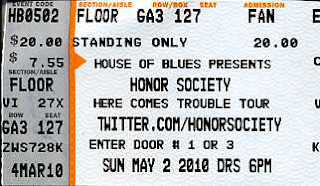 When we got to HOB it seemed liked there were a lot of girls there.  But none of them seemed to have wristbands for soundcheck / M&G and it didn’t make sense that they would already be inside because Honor Society was probably at the very least just making their way over to the venue.  We wandered around a bit and found Kat, who we knew we needed to find to get the wristbands.  Somehow we magically ended in the front of the line for the soundcheck, which was pretty exciting!

It had to have been in the high 80s, if not hotter, while we waited in line.  I’m honestly a bit surprised I am not sunburned.  Finally we were let in about 5pm and they scanned our tickets as well so we knew we would be staying inside.  We made our way to the stage and were in the front row!

The guys came out and did basically the same thing for soundcheck as they had done in New York City.  See U In The Dark, When I Come Home and part of Where Are You Now with a fan on stage with them (Shiloh).  They also answered a few fan questions which is the unrehearsed and fun part of the soundcheck.

Then we all lined up for the meet and greet.  It looked as though some girls opted out of the meet and greet in order to get front row, and I had debated trying to stay from row for the show but I’m pretty sure we made the right decision to get out of the crowd and hang off to the side.

The meet and greet was rushed, so we really didn’t get to say too much more than a quick hello.  Then we made our way to the restroom which was PLASTERED in signs saying there was a stage of emergency and we should not consume tap water.  A water main broke in the city and it affected the drinking water of something like 2 million people. CRAZY!

We grabbed a spot near the outer rail and waited for the show to begin!  Ashlyne Huff was up first, again, and we actually got to see her whole set this time.  I think she is great and her new album is out May 11! I will definitely have to check that out.  (I also have a sampler from the NYC show I will have to listen to as well!)

Next up was Just Kait.  Her drummer had decided since it was so hot he was going to play in only shorts. Which was probably a good idea, I am sure the stage lights are pretty hot, combined with it being in the 80s or hotter outside… I still really couldn’t get into her set.  She seems like a cool girl, but I don’t know, something was missing.  She also liked messing with the crowd – since every time she mentioned “Honor Society” the crowd would scream.

Then it was time for the main event, Honor Society! I had said I was going to take it easy, since my throat was sore and my voice was getting scratchy, but I just couldn’t contain myself when they came out to “Rock With You”  I decided to only “sing” along (as loud as I could haha) and not do any screams after/during songs or anything like that because those screams hurt the worst.

We were hoping for This Bed Is An Ocean again – especially after the teaser of a couple of old school songs, but they didn’t do it 🙁

I am also pretty sure Mike spotted us early on, because he was looking our way a lot!  Apparently Andy also noticed and pointed at us – twice – and somehow I missed it both times.  I wonder where I was looking? 😉

After the show (which was my 25th!) we opted to skip the merch M&G and go directly home.  On the way home, my car appropriately hit 25,000 miles!  Now it’s time to schedule some maintenance for it!

I will try to make a week in review photo post in the next couple of days!

Sunday night was my 7th show in 7 days (or 8th show in 9 days!)  I had never done that many in a row before (and I’m not sure I will ever do it again!) and my throat was killing me, my voice was going in and out and my legs were shaky – and this was all before leaving my house!

First up on our agenda was to head to the Natick Mall to Hot Topic to meet Honor Society.  When I got to Lauren’s I went to plug in the GPS, only to find that the car adapter had completely fallen apart.  It had some battery power but we weren’t sure how much and we really knew nothing about where we were going.  While I started driving north, Lauren went digging around in the car for pieces and somehow managed to put it back together.  (Well, almost! There were a couple of extra pieces – but it WORKED and that was all that mattered)

The signing at the mall was to start at 3pm and we got to the mall around 1pm.  It was HUGE and it was getting hotter outside by the second.  We went by and saw there was 1 girl in line – who actually recognized us as being CT fans and saw us at the train station last week.  We decided to go to Friendly’s.  Whenever I go to a Friendly’s they are always slow as anything, and it was no exception.  It appeared they were very short staffed and we waited to be seated.  Once we were seated, the manager came over to serve us and we did get our food pretty quickly.  However we waited an extra half an hour for our check – finally we were able to catch a waiter’s attention and get out of there and back in line.

When we got back over to Hot Topic there were maybe 50 people in front of us.  We were nervous because we had soundcheck at the show and it was 30 minutes away and check in began at 3:15.  We had no idea if we would make it.  Pretty promptly at 3pm the line started moving.  I had my Fashionably Late CD for them to sign and Lauren had her version of our 2008 scrapbook. (I had gotten mine signed in February of 09)  Jason was first and I said hi and told him how we were trying to make it over to HOB in time for the Soundcheck.  He said we’d all be racing over there and to drive carefully!  Next was Alex and we said hi and then he and Jason were talking about Lauren’s book.  I teased Alex that it was old – from back when he used to sign his WHOLE name on things.  Apparently this got to him, because wouldn’t you know he signed Lauren’s book with “Alexander”? haha

Next up was Andy who spotted I was wearing my I <3 Hanson tshirt.  He asked me if the concerts had happened already and I said yeah, they were Monday through Friday and he asked me how they were.  I told him great and that the new album would be amazing and he said something about how I would be on the movie screaming at the top of my lungs. LOL  How he knew so much without me having said anything, I don't know.  Pretty sure he's secretly on Hanson.net 😉  Mike and I exchanged hellos and I was ushered back through and waited for Lauren to make her way through the line. We went back to the car and it said it was 102°! CRAZY!  It probably wasn’t that hot outside, but since the car was roasting in the parking spot its temperature rose.  While in line we debated taking the T in or driving straight in to Boston.  I had always taken the T in the past, but since we didn’t have much time we decided to just drive straight in to Boston (eek!) We made it to the HOB about 4pm. More details on that later!