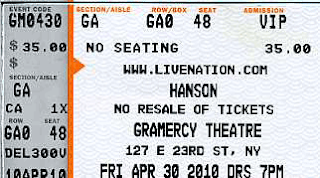 Tonight Hanson played their not yet released studio album, Shout It Out (June 8). Our goal for the night was to be front row behind the sound board and we did it – went from last row monday night to first row Friday 🙂
There was a horns section for the show which pretty much was the best idea ever and I hope they tour with the guys as well because it made it absolutely fantastic!!
A few of the songs I had never heard before, live or otherwise but they were all amazing and I think this album is going to be the best one yet by FAR.
They are so catchy and pop and make you want to dance, they are great! (If only I had a thesaurus)
(Now if only the Yankee fans on the train would stop being so obnoxious so I could concentrate on what went down tonight…)
A cool thing about being near the sound board was that I was right behind the guy who made the decision on redoing songs. I’m not sure how he decided but after they finished give a little and these walls I saw ‘redo’ written on his paper. They also redid me myself and I, probably because Taylor was talking about how it was the longest song he ever played piano for and that there was still another verse lol
Before the encore, we all sang Happy Birthday to ‘mom’ as today is the guys mom’s birthday!
(Apparently there is so much yankee drama the cops will be waiting for the train in New Haven)
Also being near the sound board we saw last night had a potential encore of Never Been To Spain and tonight Gimme Some Lovin. We hoped tonight they’d actually do GSL and they not only played it,but NBTS and shake your tail feather!!
Then as expected they came out to do the re-do songs.
I missed the 1022 train I wanted to catch and now I’m on the 1122 almost home and praying we get le off at the right track (where a moron was waiting to pick someone up blocking all the open handicapped spots. Uh hello? The world doesn’t revolve around you)
Now I’m just hoping this train drama (which I completely missed apparently) is not a huuuge issue with me getting to my stop and leaving… Though I kind of wish I was a witness hahaha
Tomorrow is Jordin Sparks and I won all access seats and a m&g so that should be fun – and we don’t need to be there until 615 so I can get some sleeep!!
Waiting for this
Thinking bout something
Kiss me when you come home
Carry you there
Give a little
Make it out alive
And I waited
Use me up
These walls
Musical ride
Voice in the chorus
Me myself and I
Never been to spain
Shake a tailfeather
Gimme some lovin
Me myself and I
These Walls
And I waited
Give a little
Sent via BlackBerry by AT