March 8, 2015 by ConcertKatie No Comments 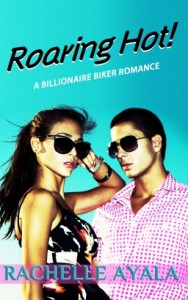 Roaring Hot is about Teo – a motorcycle racer who is a bit of a party boy and doesn’t show any signs of settling down.  His grandmother says that she wants him to bring a girlfriend to her birthday party – so rather than find someone that might be suitable he and his pal Ronaldo create a fake reality TV show so that he can hire an actress to play his girlfriend.

Of course things get interesting when the two seem to be falling for each other for real – but Amy, the actress hired, doesn’t want to get attached and tries to convince herself that she only likes him because she is being paid to.

Of course, when Teo gets injured in a race and ends up in a coma she realizes that maybe she really does love him and doesn’t want to lose him so she does everything in her power to try and get him to wake up.

This book was a bit of a roller coaster ride with Amy and Teo because they were having trouble separating what was real and what was fake for the TV show.  In the end, Amy truly seemed to care about Teo and his well being.  I don’t want to say too much more because I don’t want to give too much away.  Another great read from Rachelle Ayala.

Motorcycle racer Teo Alexiou is challenged by his grandmother to come to her birthday party with a real girlfriend. He has plenty of party girls, and he fears getting roped into marriage so he hires an actress to play the part.

The last thing Amy Suzuki wants is to be a kept woman, but her student loans are piling up and acting gigs are nonexistent. She agrees to Teo’s proposal for one summer, limited to public displays of affection.

When Teo and Amy find themselves caught in love’s grip, their new desires war with their fears. Teo wants to renegotiate, but Amy insists she’s only with him because she is paid. She would never lose her heart to a man who uses money to buy affection.

Their game playing explodes when Teo is injured on the track and breaks her contract. Too late, Amy realizes her true feelings for Teo. Can she convince Teo she truly cares before he goes back to his party girls?