November 5, 2014 by ConcertKatie No Comments 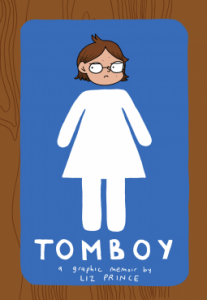 Each of the chapters has an anecdote of Liz’s life growing up – whether it was being teased for wearing a dress on church day (and getting the school to allow her to wear a shirt and tie instead), being picked on for being a lesbian with her other tom boy friends, being on the boys little league team but the whole team hating her, etc.

An interesting approach to a memoir and one that I related to and enjoyed reading. It being in graphic novel form made it a quick read and funny as well (even if the situations she was in probably were not amusing at the time!)

Growing up, Liz Prince wasn’t a girly girl, dressing in pink tutus or playing Pretty Pretty princess like the other girls in her neighborhood. But she wasn’t exactly one of the guys either, as she quickly learned when her Little League baseball coach exiled her to the outfield instead of letting her take the pitcher’s mound. Liz was somewhere in the middle, and Tomboy is the story of her struggle to find the place where she belonged.

Tomboy is a graphic novel about refusing gender boundaries, yet unwittingly embracing gender stereotypes at the same time, and realizing later in life that you can be just as much of a girl in jeans and a T-shirt as you can in a pink tutu. A memoir told anecdotally, Tomboy follows author and zine artist Liz Prince through her early childhood into adulthood and explores her ever-evolving struggles and wishes regarding what it means to “be a girl.”From staunchly refuting anything she perceived as being “girly” to the point of misogyny, to discovering through the punk community that your identity is whatever you make of it, regardless of your gender, Tomboy is as much humorous and honest as it is at points uncomfortable and heartbreaking.