November 26, 2014 by ConcertKatie No Comments

I have joined several groups on Facebook lately and noticed that there are far too many people who post something like “Following!”, “F” or “.” to get notifications on a post.  This has been annoying me because it makes the person who posted think that they got an answer to their question or make someone who has the same question think that there is an answer when there isn’t! There is a super easy way to “follow” the post without making a comment.

In the right corner, there is a little down arrow. If you click it, one of the options is “Turn on Notifications” click this and you will get notified on every response to this question. (And unfortunately every “FOLLOWING!” as well.)

Once you get the answer you need you can go back and follow the same steps and hit “Turn off notifications” to no longer get these replies.

The same process can also be used in threads where you answer a question and don’t care to get all the other replies. Just “turn off notifications” and you won’t get notifications of everyone else who answers the same question below you.

Disney Trip: Why you gotta be so rude? 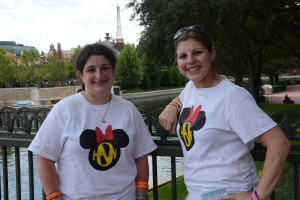 As you probably have seen – we had on Hanson/Disney shirts for the 2 days we were at Disney for the Hanson shows.  On the second day of shoes we had TWO incidents with morons.

The first guy asked us what our shirts said. “Hanson” we replied (it was the symbol.) So then he said “2 questions.  Where is the N and On purpose?”  So I showed him where the N was.  The other question didn’t deserve an answer.  (No, I lost a bet so I made this shirt and am wearing it!) He was with a girl who said that he would be going to the show later.  “On purpose?” I asked him.

The second guy was mocking us because we were annoyed when they announced that the first show was going to be canceled due to the weather. When my friend said to him “and who is YOUR favorite band so we can make fun of them?” he just stood there staring at us.  (Hey, it may have taken 17 years but did we FINALLY find a comeback to get morons to shut up?)  He came back to us later and told us “Good news! The other 2 shows are still on!”  Then he was going on and on (not to us) about his SAT scores and how he has a degree in Engineering.  Oh wow, should I be impressed? I’ve got one of those too!

Now – I get that if I was wearing a sports shirt I might have gotten shit from fans of rival teams and I feel like that goes with the territory.  But I don’t understand why you would go up to strangers, who are minding their own business, and start picking on them because of the music that they listen to. (I can only assume that the alcohol consumption of the Food & Wine festival had something to do with it.)

After 17 years of being mocked because you like a band – it’s gotten old.  I just don’t understand it. I’ve seen plenty of people wearing shirts of bands that I don’t like – but I don’t say anything to them. I don’t see the point.

There was also a 3rd moron who started singing MMMBop at the top of his lungs when we were leaving… We’re kind of impressed that the song seems to STILL have an effect on people – when it was released 17 years ago.

At the Magic Kingdom 2 strollers wheels got stuck together or something and the Dad pushing one of them ended up falling backwards.  A guy came out of nowhere, put his hand under the Dad’s head so it wouldn’t smack onto the pavement.  Then he disappeared.  He did his good deed and just moved on.  It was one of those things that you see happening in slow motion but there is nothing you can do about it – but I am glad that this good Samaritan saw what he could have done and jumped into action because things could have been very, very bad had he not swooped in!

(And really, these morons just gave us a good laugh – we’re not totally offended over it or anything – after 17 years of this crap you develop a skin for it)