November 3, 2014 by ConcertKatie No Comments 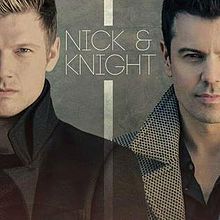 
Nick and Knight is the combined effort from Backstreet Boys Nick Carter and New Kids on the Block’s Jordan Knight.  I was pretty excited for this album initially, but after listening to it pretty much non stop for a couple days, I can take it or leave it.  The songs aren’t anything spectacular, but they don’t suck either.  They are just kind of there.  I don’t find any of them stuck in my head for hours after stopping the CD – which is actually a very weird thing because almost always whatever I am listening to in the car is stuck in my head after I turn the car off, but that is not the case at all with this CD.  I can’t even say it’s a case of me not liking it because I’ve only listened to it once, because at this point I have probably listened to it 5-6 times.   I have to say that Switch is probably the closest to being stuck in my head of all the songs on the album.  I really do wish I loved this album more.