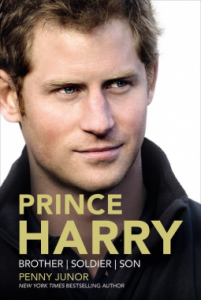 Prince Harry: Brother, Soldier Son is a biography about Prince Harry (my fave of the Princes, by far) by royal family biographer Penny Junior.  It’s kind of sad that it is pointed out in the beginning of the book that Harry will never be king – as the line is his father, William and eventually, Prince George.  I mean, I think we all know that anyway, but seeing it written down was a bit of a bummer.  The book goes on to talk about how wild and unpredictable Harry is now at 30 years old and how it might be better that he won’t be King!  It also talks about how when he was younger he was not nearly as outgoing as he is now.

Also, for a book about Harry, there was an awful lot of talk about Diana.  I actually ended up skimming through most of it.  While I know she is obviously important to Harry’s story, if I wanted to know more about her life I’d read a biography about her.  I’m here for Harry! It also talked a bit about how his family has as good relationship with the media and not a lot of stories get out and not a lot of his girlfriends “kiss and tell” which could be because he treats them well. (I’d looove to find out! haha)  I also liked how the book had quotes from people who know Harry best to tell the story of his life, military career, etc.

Overall a pretty good book though I could have done without the Diana talk and perhaps cutting that out would have made it a bit shorter as I think it came in at over 400 pages!

The authoritative biography of Prince Harry by noted royal family biographer Penny Junor, author of Prince William: The Man Who Will Be King and The Firm: The Troubled Life of the House of Windsor.

Prince Harry, one of the most popular members of the British royal family, has had a colorful life. After losing his mother at 12 years old, he spent his teenage years making questionable choices under intense international media scrutiny, becoming known for his mischevious grin, shock of red hair, and the occassional not-so-royal indiscretion. As he’s grown, he has distinguished himself through military service, flying helicopters for the RAF. He served in Afghanistan and continues to devote himself to his military career. He also follows in his mother’s footsteps with charity work–he is the founder of Sentebale, a charity to help orphans in Lesotho, and works with many other charitable organziations to help young people in society and to conserve natural resources. As he reaches his thirtieth birthday, Prince Harry is proving himself a prince of the people. With unprecedented access to the most important figures in his life, Penny Junor is able get the truth about who this mercurial and fascinating royal son really is. A modern biography of a modern prince, this book offers an insider’s look at the life of the man who is fourth in line to Britain’s throne.