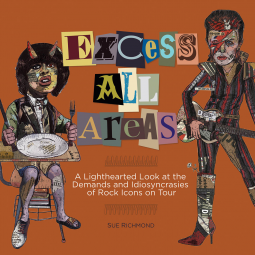 Excess All Areas is “A Lighthearded Look at the Demands and Idiosyncrasies of Rock Icons on Tour”.  Band riders are always interesting to me.  I was also drawn to this book because the illustrations are pretty awesome. The book is just a compilation of various demands that bands have when they are on tour.  Some are your typical things that make sense – tea for after the show to sooth their throat, maybe a little bit of oxygen… but then some of the demands are really out there.  The Eels for instance ask for a Furby Toy and a Telletuby Toy?

Some other interesting requests were a used paperback (probably better for the environment that way), stuff that is non-polluting, non-GMO and organic… enough ice to take a bath in… James Brown asked for a golf cart… the blood hound gang asked for a fridge magnent from somewhere local (maybe they were a collector or maybe one of their kids was! This is actually a pretty neat idea and if I’m ever a rock star I may have to add that to my rider!)  One band wanted a disgruntled house monitor engineer. Um, ok?

I think that this book is also UK based – a lot of the bands that were featured I had not heard of – but I of course had heard of Elton John and Ozzy Osbourne that were included.  Oh – and Eminem – who had an intersting request of Taco Bell and Mountain Dew imported from the US.  While I can’t fault him for this meal – it is one of my favorites as well – how good can it really be if you’re importing it from the US? How does that even work?  And doesn’t the UK have any decent food that is easier to get?

Excess All Areas takes readers on a roller-coaster, backstage ride into the surreal and unpredictable world of the band contract rider. A rider is a shopping list of items, usually food and drink, requested by the band, which forms part of the contract for the concert venue. If you think Van Halen’s ’80s demands to remove all of the brown M&M’s from the sweet bowl in their dressing room was a tad precious, think again.
Excess All Areas
delves into the dressing rooms of our favorite musical acts, from Black Sabbath to Usher, and has a good old rummage around, discovering a penchant for expensive champagne, enough towels to dry an army, the odd boa constrictor, inflatable sumo outfits, ice without square edges, water from the top of Mount Olympus, white tube socks (12 pairs, to be exact), and soda water – just for spilling on the floor.This colorful volume includes illustrations that are equally as entertaining as the outlandish 100 featured riders and will leave you amazed, stomping your feet, and shouting for more.