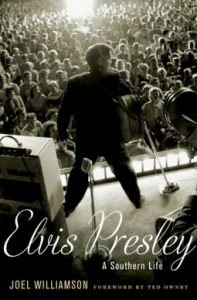 Elvis Presley was not exactly what I was expecting. It was listed under “Arts & Photography” so I thought it would be more of Elvis’ life through photographs (which would have been really, really neat) instead it was just a biography of him.  Which was not disappointing – but just not what I thought I was getting into when I downloaded the book.  Elvis has had such an impact on music and its history and evolution, it was nice to get a chance to read a bit more about him in one central location rather than just mentions of him here and there.

The book did not appear to have any photographs in it at all (I am not sure if the final product will include an insert or not) but it did tell a great story.

In Elvis Presley, one of the most admired Southern historians of our time takes on one of the greatest cultural icons of all time. The result is a masterpiece: a vivid, gripping biography, set against the rich backdrop of Southern society–indeed, American society–in the second half of the twentieth century.Author of The Crucible of Race and William Faulkner and Southern History, Joel Williamson is a renowned historian known for his matchless ability to write compelling narratives. In this tour de force biography, he captures the drama of Presley’s career and offers insights into the social upheavals following World War II. Born in Tupelo, Mississippi, Presley was a contradiction, flamboyant in pegged black pants with pink stripes, yet soft-spoken, respectfully courting a decent girl from church. Then he wandered into Sun Records, and everything changed. He first went onstage in 1954. “I was scared stiff,” Elvis recalled. “Everyone was hollering and I didn’t know what they were hollering at.” Girls did the hollering–at his snarl and swagger. Williamson calls it “the revolution of the Elvis girls.” They took command, insisting on his sexually charged performances. They lived in an intense moment, this generation raised by their mothers, when men had been at war. The first Supreme Court ruling in Brown vs. Board of Education occurred two weeks before Elvis’s first gig, turning high schools into battlegrounds of race. Explosively, white girls went wild for a white man singing a black man’s songs, “wiggling” erotically. The book illuminates the zenith of Presley’s career, his period of deepest creativity, which captured a legion of fans and kept them fervently loyal throughout years of army, wine, and women. Williamson shows how Elvis himself changed–and didn’t. The deferential boy with downcast eyes became the bloated, demented drug addict who, despite his success, never escaped his sense of social inferiority. He bought Graceland in part to escape the judgment of his wealthy, established neighbors.Appreciative and unsparing, musically attuned and socially revealing, Elvis Presley will deepen our understanding of the man and his times.