Book Review: Singing to a Bulldog 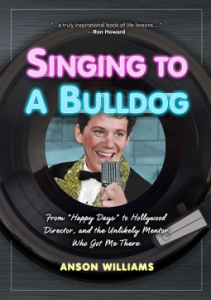 Singing to a Bulldog is an autobiography by Anson Williams – who is probably most known for his role as “Potsie” on Happy Days. The book is subtitled “From Happy Days to Hollywood Director, and the Unlikely Mentor Who Got Me There”.  The book is broken down by “lessons” and not chapters which was an interesting approach.  I liked how he wanted to get in to the business so he went to an agents office and just waited until someone could see him! He also talked about how he almost missed his audition for Happy Days.  He was having car trouble and of course back then there were no cell phones! He ended up getting there late but it was a good thing he did end up getting there because they wanted him for the role!  I Also didn’t know that there were 2 pilots for Happy Days.  The first one did not get picked up!

Anson’s mentor was a janitor – who “talks” throughout the book and Anson hears him giving advice whenever he needs him.  Anson said that it was Ron that kept the group on the show normal, since he had already been a successful actor for many years.  Also through Happy Days he was able to meet people like John Wayne and John Lennon!  I also didn’t realize that he was very involved with CP and involved with telethons because his cousin has CP. Now I love him even more!  When he met Elvis he told him he sang “darn good”

Another great story (and probably only because it is a bit timely) was that Happy Days decided to have an alien on after Garry Marshall’s son had seen Star Wars and decided that there needed to be an episode about Aliens.  Anson writes that this was the “worst script ever” and the alien was called “Mork” and played by a character actor.  When he left and they needed to find someone else – a comedian called Robin Williams got the part of Mork.  He immediately came up with a back story and a language for Mork (Nanu Nanu!) and from that appearance on Happy Days, Mork and Mindy was born!

The end of the book Anson goes back to meet with his mentor, Willie.

I thought this was a really sweet book and I really enjoyed reading it!

Growing up in 1950s California, young Anson Williams was clumsy and unsure of himself. He started working odd jobs as a teenager to help support his family and met Willie, an aging, uneducated, African-American janitor who unexpectedly became a mentor. In Singing to a Bulldog, Williams relates both the life lessons taught by Willie and the never-before-revealed stories of the famous (and not-so-famous) folks he’s encountered during his 40 years in Hollywood, including: