Try It Tuesday: Make Your Own Disney Shirt #2

October 14, 2014 by ConcertKatie No Comments

For our second Disney trip, I decided to try Iron On Transfers (I think the last time I used iron on transfers was in 2000 with less than stellar results, but I was hoping that they’ve advanced a bit in the past 14 years!) because these shirts were red and I couldn’t trace a stencil from underneath it like I did with the white shirts!

First I printed out the text on a regular piece of paper to make sure the sizing was ok to fit across the shirt.  Then I decided I wanted the letters to be yellow instead of white, so I printed them again to make sure everything looked nice.  Then I finally got around to printing on to the iron on transfer.  I got special ones for dark clothing, they are on a white background instead of clear, so you had to cut out around the design or else you’d have a lot of excess white. You have to leave the print out alone for at least 30 minutes so that the ink can settle/dry!  The cutting out portion was done with an x-acto knife and there was some peeling of the black in the cutting.

Then I watched a tutorial on the website of the iron on transfer company so I knew what I was doing. I got some help and had a ruler to make sure things were even and then each letter was ironed on.  The white I mentioned earlier was around some of the edges and looked really obvious to me – so I took a black sharpie and carefully colored everything in.  From a distance, you can’t tell.  Up close, you can, but I don’t think anyone will get that close to look! 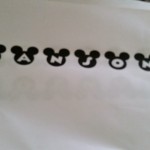 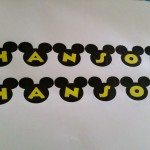 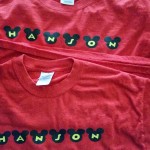