Music Monday: Ariana Grande My Everything

October 13, 2014 by ConcertKatie No Comments 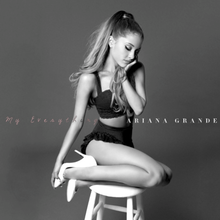 My Everything is the 2nd album from Ariana Grande who apparently is the artist that no one knows according to every Big Brother blog I read. (Friends and I have come to the conclusion that everyone knows her song if they hear it – they just don’t realize that it is her.  And if you can’t recognize the song? I hate to say it … but you’re old.)

I don’t know if I’ve listened to Ariana’s first album in its entirety or not, but this one is a bit different than what I was expecting from her considering what I had heard her perform when I saw her live in 2011. (Yeah, I’ve known about her for a while, but I can’t take the credit. We only went because Action Item was opening.)  I do enjoy this album but it’s not quite my style, I guess you could say.  It seems to lean a bit more towards hip hop (I guess?) than I do.

My only complaint with Ariana is that I can never understand what she is singing! Enunciate, girl!  Although I did read an article about Break Free having a couple of lines that were grammatically incorrect. (“Now that I’ve become who I really are”) Ariana fought the song writer on it and LOST.  Is it really that big of a deal to sing AM instead of ARE? It’s not like the syllables are different! Although it WAS written by Max Martin who has a freaking ton of hit singles that he’s written out there, so I guess he knows what he is doing, but is it really too much to ask to try a little bit harder to be grammatically correct?  (ps since I’ve been debating a 6 degrees of Hanson on my CD reviews – Ariana can be linked to Hanson through Max Martin who co wrote Last Friday Night for Katy Perry – Hanson was in the video and he also wrote for Marion Raven – Zac’s ex-girlfriend.)