October 15, 2014 by ConcertKatie No Comments 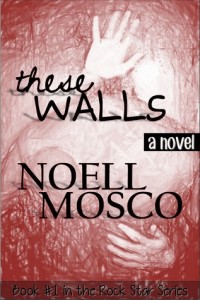 These Walls is a book in one of my favorite genres – rock star romance! (And I may have just made that up, but I don’t care.)  The story is about Lily, the boy next door, Lucas and her best friend Melissa.  The story goes back and forth from 1999, 2000 and to present day.  I thought that the author made a good use of this flashback because rather than start in 1999 and give us all the back story at once, it was kind of inserted into the present day story only when it was needed to give you a bit more information and background on what was going on in the present day.  Lucas is the lead singer of a band – The Fingers of Fish – back in 1999 they are just a garage band and Lily takes Melissa to go see them at a local festival.  Always the flirt, Melissa falls for Lucas. Lily of course has feelings for Lucas but won’t tell anyone – not Melissa or Lucas.  So when Lucas tries to kiss Lily and Lily then says she is sick – he starts dating Melissa, whom he really didn’t even like.

Present day – Melissa and Lily are still best friends but Lily and Lucas have hardly talked.  Lily has graduated from college and is on her way to being a physical therapist.  When she flies back home after graduation she is surprised to see that it is Lucas that picks her up from the airport and not her parents.  Lucas is also still in The Fingers of Fish band – but now they are one of the hottest (don’t call them boy) bands out there.  Relocated to L.A, Lucas was glad that his trip home worked out so that he could see Lily too.

And then things get interesting.  There is a lot of “will they, won’t they” going on between Lucas and Lily.  Melissa gets the big idea that she wants to move to Las Vegas and wants Lily as her roommate.  Since this is much closer to Lucas in L.A., somehow they convince Lily to apply for a job out in Vegas and she gets the job.  This way she can visit with Lucas more frequently.  Although I have to say Lily’s biggest flaw is reading the gossip mags AND believing everything she reads in them.  She starts kind of seeing Lucas but things aren’t public.  When the gossip mag says he’s dating a singer – she does not ask him about it – instead she goes out with the guy at work who has been bugging her about going out with him. They hook up… she ignores Lucas… and then finds out the truth.  (I guess of course without Lily’s flaw – the rest of the story wouldn’t play out as it does so it is needed – but still made me pretty crazy when I was reading the book!)

I don’t want to give away much more than that – and there is a lot more that goes on in the book.  At first I was intimidated because it was 300 pages – but I have to tell you it goes quickly and you will not want to put it down because there is just so much going on in it and you will have to know what is going to happen!  Really, I can’t say enough great things about this book (and the author is a fellow Hanson fan so that is great too!) and if you are anything like me and love you some rock star romance books – add this one to your to-read list!

Lily Foster is a 26 year old recent graduate from small-town Ohio. She returns home after school so she can get her life in order and start her career as a physical therapist.

Lucas Kingston is a hardcore rock star, famous with his band The Fingers of Fish. He tours the world with his music and has throngs of fans, most of which are women.

Their worlds are so vastly different, except they have one thing in common: each other.

Lily is quick to build walls to prevent Lucas from getting too close to her heart again. She’s not sure she can deal with the departure of her friend, especially if she’s starting to fall for him. How will she handle her emotions? Is it possible to love Lucas, especially since she doesn’t know him anymore? And how can she really trust him since he’s dated (and cheated on!) her best friend, twice?

His smile seems to make her weak. And he knows it.

**Warning: adult content – may not be appropriate for under 18 years old.