Book Review: The Before Now and After Then

September 12, 2014 by ConcertKatie No Comments 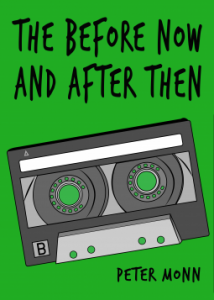 I’m not sure how to review this book without giving some things away.  However, what I am going to give away is not in the book description but it does happen VERY early on in the book so it won’t be ruining the outcome. I hate to do it, but I can’t tell how else to explain it.  So if you think you want to read this book completely unspoiled – then leave this post now.  If you’d like to get a bit more info to find out if you think you should read this book, then keep on reading!

The book begins with a “hurricane of events” for our main character, Danny Goldstein.  His twin brother Sam and their dog, Griffin, head out so that Danny, who is gay, can come out to his parents. They had a big planned hatched with Sam coming home in the middle.  When Danny goes to talk to his parents he hears them fighting about infidelity.  Not knowing what to do when the door opens and they see him standing there, he just blurts out, “I’m Gay”. Right after that happens, police are at the door to let them know that Sam has been in an accident.

So basically in a chapter, Danny’s life has been turned completely upside down and we spend the rest of the book having Danny trying to find himself – because he had always been kind of hiding behind Sam.  He starts a new school and makes a friend named Cher – named after the singer, whose Mom has always wanted her to have a gay best friend. He also sees a boy at school named Rusty that he thinks that he likes but doesn’t know how to find out if he likes him back.  His “uncle” comes to stay with him and his mom for a while (They are not really related, he was his mom’s best friend growing up and also a member of the band Danny’s parents were both a member of.)

This is a really well written YA novel and I liked all the different relationships that Danny had and how they all kind of helped him find out different sides of himself. His gay uncle Alex could give him advice on relationships and what to do and not to do (even if what he tells him not to do has already been done.)  Rusty teaches him how to be in a relationship and care for someone else more than you thought you could.  Cher helps him find himself in other ways.  His parents try to help him with coping with the loss of Sam, as this is new territory for all of them.

And then of course there is the evil bully (who I was hoping would turn out to be gay himself but that was never addressed) who picks on Danny and makes him pass out numerous times because he makes him so nervous.

This was a book that I didn’t want to put down, I had to see how it ended, and it was almost like a roller coaster ride with the ups and downs and I just really wanted Danny to come out ahead. I think he did.

Danny Goldstein has always lived in the shadow of his identical, twin brother Sam. But when a hurricane of events forces him into the spotlight, he starts to realize that the only thing he’s truly afraid of is himself. With the help of his costume changing friend Cher, a famous gay uncle with a mysterious past of his own, two aging punk rocker parents and Rusty, the boy who will become his something to live for, Danny begins to realize that the music of the heart is truly the soundtrack for living.