September 22, 2014 by ConcertKatie No Comments 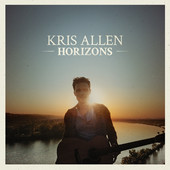 
Kris Allen’s 3rd CD Horizons is one that I’ve been (not so) patiently waiting for.  I’ve heard several of these songs live over the past year or so going to see him perform live – but there’s such a difference in hearing a song live versus polished and on an album.  Horizons does not disappoint – it’s everything you’d expect from Kris Allen – and more.

The CD kicks off with “Young Love”, which for the longest time had no name and was called “Paul Simon” because of the Paul Simon vibe the song has. (Now the question is – do I go back and edit all the setlists that now have an incorrect song title in them? Nah… too much work!)

A lot of the songs are about his life over the past few years – Beautiful & Wild he wrote when he and his wife were expecting their son Oliver (now 1 year old and the cutest baby in the world!).  “In Time” is about recovering after the head on collision that he and his pregnant wife were in just before he was supposed to head out on the Out Alive tour.

My only complaint is that the CD is short – I want more! I give this CD 5 out of 5 stars and know that it will be in heavy rotation!!