September 19, 2014 by ConcertKatie No Comments 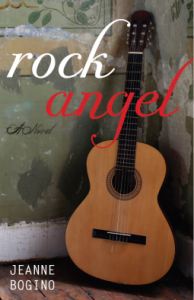 I will preface this by saying there was a lot of mentions of drug use in this book and I was tempted to stop reading because of it. (I know, I know, sex drugs and rock n roll and all that – but it’s my free time to read so I can do what I want!) I looked up reviews on Good Reads and everyone was raving about the book so I did decide to stick it out.  But if this is a topic that you’d rather not read about then I would advise you to skip this book. If it’s not a problem for you, then I think you’ll enjoy the book.

The book starts in 1990 and heroin addicted Shan gets an audition for a band instead of just doing solo gigs as a folk singer.  She would be replacing the band’s previous guitarist who is currently in rehab and then going to jail for running a meth lab.  Quinn is the leader of the band and the band is named Quinntessence.  They guys in the band are in their mid 20s so a bit older than Shan is. After joining the band Shan gets in a fight with her drug dealer and Quinn comes to her rescue.  He also lets her know that he doesn’t care what she does on her time, but at their gigs it is a huge no.  Of course, Shan agrees but can’t stick to the promise.  The book goes through 1991 and then 1992-1994.  The only way you can kind of tell it isn’t taking place in present day is there is no mention of cell phones and there was a gift of a pager!

Shan ends up hooking up with another guy in the band, Dave (even though it seems like there is some tension between Quinn and Shan) and he tells her that Quinn was in rehab!  Quinn seems to be jealous of this hookup/relationship/whatever you want to call it.

Eventually, Q and Shan end up finally getting together.  We also find out about Quinn’s past with the girlfriend of another guy in the band… and then Quinn & Shan’s relationship turns into even more of a  rollercoaster ride than you thought possible. (I’m being vague on purpose so I don’t give it all away, sorry.)

Overall, minus the drug use, it was a well written book and a great storyline. Though the book was a bit longer than my usual read at over 400 pages!

Shan is young, beautiful, talented, and addicted to heroin in Rock Angel, a novel that follows her meteoric rise to guitar goddess stardom in the ’90s. She is discovered in New York by a handsome, arrogant musical genius named Quinn, and sparks fly between them when he hires her as lead guitarist of his band.

Although Quinn is accustomed to bedding a different groupie every night, he can’t ignore his deepening feelings for his new bandmate. From gritty Greenwich Village clubs to L.A.’s Troubadour; gigging and touring the country to the cover of Rolling Stone, Rock Angel is infused with the passionate music and intense sexual chemistry of Shan and Quinn. Shan must work out her personal demons and learn to trust Quinn enough to love him, but still remain true to the music that has always been her salvation.