Book Review: How to Reprimand Your Rock Star 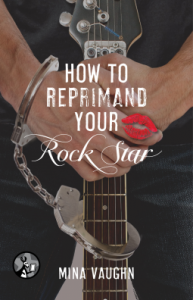 How to Reprimand Your Rock Star caught my eye, obviously because it was a romance novel about music.  But what I found funny was that the main character, Thea, was a student at UCONN which is where most of my high school classmates went to school. (And because of that, a school I didn’t even bother applying to.)  Thea plays for the Lady Huskies – and if you are from CT or even somewhat interested in college hoops you would know is a big deal.  So the fact that she is allowing herself to get sidetracked by a rock star is also a big deal. (Especially since she is only a freshman and is on her way to becoming Rookie of the Year!)

Thea meets Keaton, in the girls locker room.  She has no idea who he is, but is immediately attracted to him.  He seems to know everything about her and somehow his bands tour is perfectly syncing up with the Huskies play off schedule.  But then the problem arises – will thinking about him help or hurt her basketball game?  A lot of sneaking around starts happening and she is very close to getting caught.  Can she secretly date this rock star without her teammates finding out and without jeopardizing her team’s chances at winning?

In this fun and saucy romance novel, all-star college basketball player Thea dominates on the courts—and off—with a rock star who is determined to win her over.

Thea is a star basketball player at UConn on track to be Rookie of the Year. That is, if she can stay focused on the game. Lately that hasn’t been going so well, as her knee has been bothering her. But that’s not the only thing on her mind…

Ever since rock star Keaton Lowe surprised her in the girl’s locker room, Thea can’t stop thinking about him. On top of his status and enticing ways, he seems to know everything about her. But some of his actions cross the line, and Keaton needs to be punished. Will Thea keep her head in the game, or get distracted by her other favorite pastime—reprimanding her rock star?